Half of young Australian academics ready to quit

The future of Australian higher education is hanging in the balance because young academics feel unappreciated, underpaid and lacking in job security, according to a new report. Just under half of the under 30s surveyed say they plan to leave the country or the profession as a result.

Australian universities have not been building long-term capacity, says the report’s lead author Emmaline Bexley of the University of Melbourne’s center for the study for higher education. ’Many younger academics are on casual or short-term contracts, and they are the most dissatisfied and the most likely to be considering leaving,’ she says. ’In Australia, around half of the tenured academic workforce is expected to reach retirement age within the next 10 years. So, if Australia cannot translate short-term staffing into more meaningful, long-term forms of employment for early career academics, we will be facing a crisis.’

The study, which was funded by the government and surveyed 20 universities, found that nearly half of Australian academics found their workload unmanageable. Younger academics, crucial to regenerating the workforce as older members retire, reveal high levels of dissatisfaction with job security and pay. ’When we look at changes in the sector over the last 15 years, we see an increasing casualisation of academic work, increased student to staff ratios and decreases in the success rates of research funding applications,’ says Bexley.

Overall, nearly half the academic workforce intends to retire, move to an overseas university or leave higher education in the next 10 years. In the next five to 10 years, nearly 40 per cent of academics under 30 plan to leave; and around one-third of staff aged 30-39. 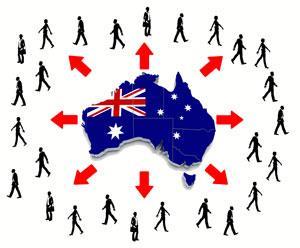 Young Australian researchers are considering careers in other countries

While there has always been a flow of young academics between institutions and countries, Bexley points out that now it is because they are dissatisfied with work. ’Ideally, academics should be travelling for scholarly reasons,’ she says.

Mick Moylan, who runs the outreach program for the school of chemistry at the University of Melbourne, says that almost all of department’s staff aged between 20 and 40 are on contracts running for two years or less. ’The vast majority of us quite like our jobs and enjoy the science and our workplace culture, but are disheartened by the short-term nature of our work and the lack of job security,’ he says. Most of the research and teaching staff work very long hours to cover their workloads, he adds, and the competition for permanent academic positions is intense.

A move away from casual work is essential, says Jeannie Rea, president of Australia’s National Tertiary Education Union, which supports a structured early career scheme. ’To be sustainable in the longer term, our universities will have to be able to offer staff rewarding and secure careers. For this they will need a substantial increase in public investment,’ she says.

Bexley believes increased government funding is not the whole solution, however. ’There needs to be a real change within institutions in terms of the way academic work is understood, valued and promoted.’