A parasitic pest that can devastate entire fields of vegetable crops is a step closer to being brought under control, thanks to the synthesis of a compound that tricks its eggs into hatching early.

The pest in question, the potato cyst nematode, is a millimetre-long worm that feasts on a family of flowering plants that includes tomatoes and aubergines, as well as potatoes. Its eggs can lay dormant in the soil for more than 20 years before hatching when they detect their host plant. 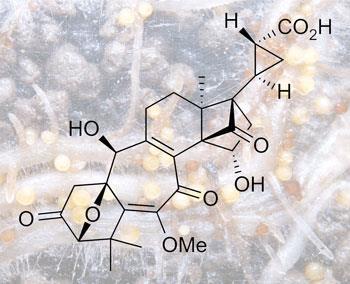 The trigger that causes the potato cyst nematode to hatch out and start feasting is a compound released by the host plant itself called solanoeclepin A. The Japanese team, led by Keiji Tanino at Hokkaido University in Sapporo and Masaaki Miyashita at Kogakuin University in Tokyo, have just completed the first total synthesis of solanoeclepin A, giving hope that this crop pest could one day be brought under chemical control.

The idea would be to trick the nematode into hatching out early, as once hatched the worms die within a few weeks in the absence of their host plant. However, solanoeclepin A is only produced in minute amounts by the crop plants, so the only way to produce enough of it to treat infected soil is by chemical synthesis.

Solanoeclepin A is a densely functionalised heptacyclic structure, whose carbon backbone includes carbocycles of every size from three-membered up to seven-membered rings. Its construction required 52 steps, some of which were developed especially for this synthesis, says Tanino. ’We felt great difficulty in the late stages of the synthesis, because there are many functional groups on the intermediates,’ he adds. The synthesis produced 5mg of the natural product, which has been used for biological testing.

Hatching the dormant worm eggs, is certainly a potential strategy, says Owen Matthews, a crop protection product development consultant based in Brisbane, Australia. ’Nematode control is likely to be of most benefit in horticulture - for example, tomatoes - but this synthetic route would need further development to produce commercial quantities and it will be an extremely expensive active ingredient for agricultural use.’

Tanino and Miyashita are already looking for simplified derivatives of solanoeclepin A, which retain the bioactivity of the natural product but are much easier to synthesise. During the total synthesis, the researchers also prepared various segments of the compound to test for bioactivity. ’The left side of the compound might be essential, or it might be the right side - no one knows that yet,’ says Tanino.