Heather Williams: Science is for everyone 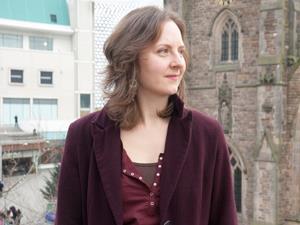 Heather Williams is a medical physicist at Central Manchester University Hospitals who specialises in positron emission tomography (PET). She is also an advocate for women in science and helped to establish the very successful Science Grrl initiative.

When you decide that you wanted to be a scientist?

I’ve always been fascinated by the natural world. My Dad is a packaging engineer so he was keen to explain how things worked and we used to spend Sunday afternoons making models in the kitchen. I think that hands-on exploration of the world encouraged me to get stuck in and see how it all fitted together.

Did that desire to work things out lead you to the field of medical diagnostics?

Yes, I think that’s why I’m in such an applied field. I first learnt about medical physics at school: I remember the lesson when I was about 15 where our physics teacher explained that you could inject radioactivity into people and see where it went and use that to study processes in the body – I thought that was immensely clever. I went home and told my Mum about it and she said a friend of my Dad’s actually did this for a living, he was a medical physicist, so I spent some time with him and loved it.

I’m one of those strange people who from the age of 16 actually knew what I wanted to do. I went into A-Levels and a degree and beyond with the aim of being a medical physicist. I’m fascinated by the process of how it all works but being able to apply it in a medical setting really appealed right from the very beginning.

So you’re actually doing what you always want to do?

Yes, there aren’t many of us but we do exist. 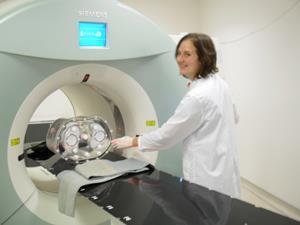 What does your work involve?

I’m an imaging physicist so my main interest is in optimising the image acquisition and tailoring that to look at a particular process as well as the kind of patients who are referred for that test, to generate to the best quality images and the most accurate measures of function. There are an awful lot of variables in that acquisition and processing chain that you can change and alter in order to get the best results. I also need a good understanding of what radiotracers do, where they go, their uptake patterns in normal patients and those with particular diseases, and there are a whole range of diseases that we might be able to look at doing that test.

On a day-to-day basis my job is to make sure that this is done consistently well so that our medics can look at the images they get from our scanners and see very clearly what’s going on.

I’m also involved in research where I set up imaging up from scratch. In this situation you’re not quite sure what result you’re going to get, so it starts by being very flexible and then you hone that down until you’re confident you know the absolute best way of doing something and why.

So there are essentially two ways of working: One is where you know a way of doing something and you’re tweaking it for a particular set of patients and a particular set of equipment, that’s for the routine work. Then there is the ‘blue skies’ research where we’re not quite sure what to expect and we need to maintain the possibility of changing things considerably to refine it.

Can you give me an example?

With a kidney scan we’re looking at the filtration of the tracer out of the bloodstream, through the kidney, down the ureters and into the bladder. That is a process that we image using a series of very short pictures to produce a movie of how the tracer moves through the system.

If we’re looking at something that needs to accumulate in bone then we wait a couple of hours for that accumulation process to take place but we want really crisp clean images at that later point in time of that fixed distribution.

The way of setting up our cameras for those two applications is very different, one to accurately track a rapidly altering distribution and the other to get really high resolution and detailed images at a later point in time. So you have to understand the biochemistry of how the tracer is processed by the body in order to set up the best imaging system to take reliable pictures of that process.

What do you think the future holds for radiotracers?

There are several avenues that are being pursued at the moment. One is to look for alternatives to technetium: 99mTc has been the workhorse of nuclear medicine for about 30 years but it is the by-product of reactors and over the next 10 or 20 years many of those reactors are either going to be closed down or overhauled for long periods of time so availability is becoming a real issue. Our whole armoury of tests is potentially undermined by this 99mTc shortage.

Another big area of development is new tracers for PET, which is becoming more and more widespread. Five or six years ago central NHS [National Health Service] funding was released for the installation of PET scanners and we went from having 10 scanners in the whole country to in excess of 30, going on 40, in a very short space of time. There is an awful lot more PET being done, which is a very good thing. Most of that uses 18F-fluorodeoxyglucose (FDG), an analog of glucose largely used for cancer imaging. A network of commercial cyclotrons has been established to meet the growing need for FDG, which supply hospitals up and down the country, as well as producing a few other tracers less frequently. Many centres don’t have their own cyclotron on-site, so tend to do FDG oncology imaging and not a lot else; the availability of tracers limits the applications of PET. If we can find tracers that are as accessible to centres that don’t have their own cyclotrons as FDG, or cost-effective means of producing a wider range of tracers on-site from commercially-supplied radioisotopes, then the implications for PET could be expanded rapidly.

The third application I’d mention is the development of radiotracers for therapeutic purposes. This is not something I do a great deal of, I’m mainly in diagnostics, but there is a lot of work being done to tailor the delivery of radiation doses to tumours using ß-emitting radiotracers as opposed to the gamma-emitters we use for diagnostics. ß particles deliver a localised radiation dose, which in combination with tracers that target specific tumour types helps focus cancer-killing levels of radiation on tumours more accurately than even the latest radiotherapy or chemotherapy. 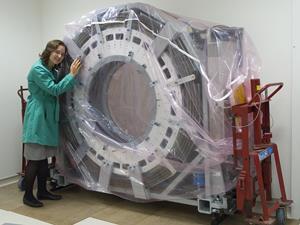 Heather with her favourite piece of kit

Do you have a favourite bit of kit?

Yes, we all have favourites. Mine is the Siemens Biograph mCT PET scanner which I love deeply. I was waiting three or four years after I joined the department to get it. One of the reasons I was appointed was because I have a PhD in PET and there was a promise that there would be a PET scanner - but it was a while in coming. So when it was eventually delivered I was standing outside freezing in the Manchester drizzle when the big truck from Germany arrived. It’s a beautiful thing and a staggering piece of engineering, I love it when it’s being serviced and the covers come off and you can see the intricacy of its inner workings. With PET you’re detecting pairs of gamma rays within nanoseconds if not hundreds of picoseconds. It’s so quick and handles so much data in so little time. It’s phenomenal really and I’m always impressed by it. I’m really pleased that we’ve got something with that capability on site and are able to do such positive work with it.

You’re very passionate about supporting women in science, how did you get into that in the first place (apart from being a woman)?

When I was at university there was probably one woman to every 10 men in my year. I didn’t particularly notice it, I didn’t feel that I was in any way discriminated against. I have two children – the NHS is quite family-friendly and supportive of flexible working so I’d been able to sort out a way of continuing my career that was compatible with being a hands-on Mum. I began talking to other people who were working in other fields within physics who hadn’t had been able to do that and hadn’t had that flexibility. So I looked at the current representation of girls within physics degrees and it hasn’t got any better, it has actually got slightly worse since I graduated, so I wondered what was going on regarding the assumptions of what women should or shouldn’t do and how those expectations could be linked with the dearth of women having a scientific career at the highest level.

I joined the women in physics group at the Institute of Physics. Then I joined twitter and I started chatting to a load of other female scientists about these issues, and we just thought “let’s just do something”. People like us need to be more visible and that’s how Science Grrl was born. We’re in the business of celebrating and supporting women in science and showing the diverse range of careers that are out there and trying to challenge this persistent stereotype of a middle-aged white man with bad hair who does science. If people meet enough of us then they will realise that science is for everyone.

I certainly got a very positive attitude from the Science Grrl website.

The positivity is completely intentional. There is this myth that ranting and shouting about things is the way to get things changed. Well, it might be the way to grab headlines but it’s not a very nice environment to exist in and it’s not the way I like to do business. I think if you reinforce the message that it is difficult for women in science then that actually puts more people off.

I’m not denying that there are some people who have had to give up careers they love because they can’t do what they need to do in terms of their family responsibilities and continue in their career, and others have been actively discriminated against just because they’re a woman. But I would rather demonstrate and promote what’s possible than focus on the negative. There is so much brilliant work being done by such fantastic people. Every week I meet amazing women in science. If they’re more visible then it makes it more normal, it shifts everyone’s expectations and makes these paths more accessible for the generation coming up after us.

Do you have any advice to people thinking of exploring a career in science?

I think it’s interesting that I started out as a physicist but now my expertise spans technology, computing, chemistry, biology, anatomy and physiology. I approach problems with a ‘physics’ way of thinking, I’m very much about building models of systems and dissecting them into their components, looking for overarching themes and laws that hold true in my data, but I actually need a broad scope of understanding. For anyone considering a career in science: don’t think that if you pick biology then you’re just going to do biology. Pick the discipline you like best but be flexible, you may well find your career moves across the whole spectrum of science and you end up applying your expertise in unexpected places.