Hexion buys its way out of Huntsman merger

What were the biggest chemical breakthroughs published by scientists during 2008? In consultation with an expert panel of scientists and journal editors, Chemistry World reviews the best work and important trends of the year’s published science papers

Climate change and energy security continued to make headlines during 2008, and chemistry once again spearheaded the quest for carbon-neutral alternative energy sources. Splitting water to produce oxygen and hydrogen is perhaps the ultimate clean energy source, but it usually requires expensive platinum catalysts. Going some way to address this problem, Dan Nocera and colleagues at MIT discovered a cheap, cobalt- and phosphorus-based catalyst for the oxygen-producing side of the electrochemical water-splitting reaction (Chemistry World (CW), September 2008, p25)[1]. Meanwhile, Bjorn Winther-Jensen and colleagues at Monash University showed that a polymer-based electrode could also replace platinum in the reverse reaction - that is, combining oxygen and hydrogen in a fuel cell to produce electricity (CW September, p25)[2].

Water-splitting powered by solar electricity could be an effective way to store sunshine as chemical energy. Capturing that sunlight looks set to become much more efficient, thanks to the organic solar energy concentrators developed by Marc Baldo, also of MIT (CW August, p25)[3]. Two dyes coated on a sheet of glass collect short-wavelength sunlight and convert it to longer wavelengths. This light bounces around in the collector before reaching the edges, where it’s picked up by photovoltaic cells - effectively capturing more wavelengths of sunlight with fewer cells. 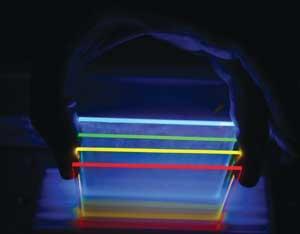 Harnessing plants’ ability to harvest sunlight is also high on the research agenda - one key question being how to break down plant cellulose into useable sugars. Ferdi Sch?th at the Max Planck Institute in M?lheim, Germany, showed that solid acid catalysts can turn cellulose into sugars, once it’s been dissolved in an ionic liquid (CW November, p24) [4]. And James Dumesic’s team at the University of Wisconsin-Madison explained how to strip the oxygen atoms from these sugars to give bio-petrol (CW October, p24)[5]. But nature could also offer a solution to the cellulose problem: a fungus found in the Patagonian rainforest can convert cellulose directly into biodiesel (CW December, p22) [6]. 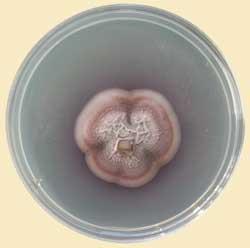 Gliocladium roseum, a rainforest fungus, feeds on cellulose and churns out diesel

But as with energy, sometimes in synthesis it’s best to let nature do the work. Manfred Reetz at Mulheim’s Max Planck Institute continued his research developing biocatalysts, developing a screening program for yeasts that automatically kills off poor performers. Yeasts catalysing an undesired reaction release a toxin that kills them, whereas those catalysing the correct reaction release a food source (CW December, p28)[11]. Meanwhile, Lin Jiang from the University of Washington in Seattle and colleagues used computer design to create an artificial enzyme from scratch - work which brings on the prospect of bespoke enzymes designed for any given chemical reaction (CW April, p29)[12].

Nature is also a rich source of potential drug molecules, and a new approach by the University of Oklahoma’s Robert Cichewicz shows how this resource could be expanded even further [13]. Fungi have the genes to make a far greater number of compounds than they actually produce - but Cichewicz reactivated some of these ’silent’ metabolic pathways, producing a new suite of natural products for testing (CW June, p34)[14].

Chemists keen to improve the performance of catalysts were treated to demonstrations of tracking techniques that could picture catalysts during reactions at nanometre resolution. X-ray microscopy (CW December, p23)[14] and magnetic resonance imaging (CW March, p39)[15] have been used to peer inside microreactors to follow the course of catalysis, while Paul Mulvaney at the University of Melbourne measured reaction rates on individual gold nanocrystals using surface plasmon spectroscopy. With some signal-to-noise improvement, it should be possible to study single molecule interactions with the nanocrystal surface, says Mulvaney.

Meanwhile, James Cahoon, Karma Sawyer and Jacob Schlegel at the University of California, Berkeley, used 2D-IR to capture information about the transition state of a rearrangement reaction taking place in solution [17]. By tracking changes in the molecule’s vibrational modes during a reaction, the technique reveals direct evidence for the time scale, transition state, and mechanism of the process.

Caught in a trap

New chemical structures that hold fast to elusive ions and molecules were also showcased in 2008. Polly Arnold and Jason Love at the University of Edinburgh captured the very stable uranyl dication [UO2]2+ - the most common form of uranium - inside a cyclic organic framework. Trapping this cation weakens the uranium-oxygen bonds enough for one oxygen to be chemically modified - suggesting a similar approach may help to treat neptunium and plutonium analogues in nuclear waste (CW February, p29)[18]. At the other end of the reactivity scale, Kim Baines and colleagues at the University of Western Ontario, Canada, successfully trapped a highly reactive germanium dication inside a cryptand cage - the first ’naked’ dication of a non-metal ever reported (CW January 2009, p26)[19].

Yaghi subsequently showed how effectively these structures capture carbon dioxide - the best trapping 30 litres of the greenhouse gas in a litre of space, at atmospheric pressure (CW June, p23)[21]. The ZIFs could be used to purify gas streams containing carbon dioxide, as they have excellent selectivity thanks to functional groups which act like ’revolving doors’ - allowing CO2 molecules to enter but keeping out other gases such as nitrogen, methane and carbon monoxide.

George Whitesides continued his research into cutting the cost of microfluidic technology, so as to improve healthcare in the developing world. Whitesides’s Harvard team designed a cheap microfluidic system based on paper (CW October, p4)[22]. The paper, coated with a photoresist monomer, has microfluidic channels drawn or printed onto it. Exposing the paper to sunlight triggers polymerisation, and washing off the unreacted monomer reveals the microfluidic channels. In related work, Whitesides showed that a cheap centrifuge able to separate blood plasma from cells could be made from an egg whisk - allowing point-of-care blood analysis in remote regions without access to electric centrifuges (CW November, p28)[23].

Chemistry World’s 2007 review highlighted the promise of graphene (a single atom thick layerof carbon) which had been used in transistors and sensors able to detect individual gas molecules. But the graphene used in these studies was made laboriously, peeled layer by layer from graphite. A series of papers during 2008 improved on approaches to graphene production: from chemically breaking down graphite oxide in solution (www.rsc.org/chemistryworld/News/2008/January/28010802.asp)[24], to the latest research which gives gram quantities of graphene by pyrolising the product made by reacting sodium with ethanol (CW January 2009, p23)[25].

Moving from the laboratory to kitchen chemistry, so-called ’electronic tongues’ became ever more sophisticated, providing automated taste tests far more objective than human senses can manage. Richard Compton’s team of electrochemists at Oxford University used multiwall carbon nanotubes as electrodes to detect the concentration of the heat-causing capsaicinoids in chilli sauces, allowing us to measure sauce strength without the risk of a burning tongue (CW June, p34)[26]. And Spanish scientists developed a portable robotic tongue with a taste for vintage wine. It employs an array of six ion-sensitive chemical sensors to detect a wine’s variety and vintage - revealing whether that classic Bordeaux really is what it’s claimed to be (CW September, p32)[27]. 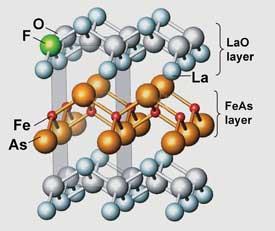 The crystal structure of LaO(1-x)FxFeAs, one of a new family of superconducting materials based on iron

But perhaps the most intriguing discovery of the year was a new set of high-temperature superconductors, produced from an unlikely area of the periodic table. For two decades, the search for superconductors that worked at high temperatures has been restricted to copper - but in February 2008 Hideo Hosono’s team at theTokyo Institute of Technology reported an iron-containing compound that could carry electricity with no resistance at 26K. It quickly spawned a whole family of high-temperature superconductors based on iron (CW July, p20)[28], the latest superconductive up to around 55K [29]. An area to watch in 2009.