Homogeneous catalyst made to act more like an enzyme 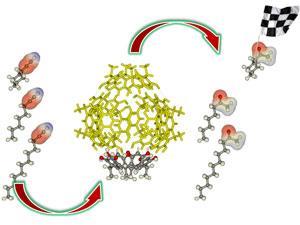 Homogeneous catalytic systems which display selectivity in a mixture of similar substrates are rare. Now scientists in Italy and the Netherlands have shown that encapsulating a homogeneous catalyst in a supramolecular host can give it a more discerning nature.

Alessandro Scarso at the University of Venice and colleagues found that putting a catalyst within a supramolecular host makes it act more like an enzyme – only specific substrates can fit into the cavity and reach the catalyst. Supramolecular interactions between the substrate, host and catalyst provide additional levels of electronic restriction.

‘I think that new advancements in catalysis are possible by merging knowledge from catalysis and supramolecular chemistry, two fields that often do not speak the same language,’ says Scarso.

The team encapsulated an N-heterocyclic carbene–gold catalyst within the supramolecular structure resorcin[4]arene and investigated the effect this had on substrate selectivity in the hydration of alkynes which differed only at positions far from the active triple bond. They found that although the reactions became sluggish because the substrate had to sneak past hydrogen bonds from the host in order to enter the cavity, significant selectivity of some substrates over others was seen due to increased catalyst–substrate surface interactions. Some substrates fitted the cavity better than others and the reactivity when structurally rigid substrates were used could also be inversed in comparison to free catalyst reactions. The steric constraints from the host meant that smaller substrates were favoured, even if they were intrinsically less reactive.

‘The authors do a splendid job of applying encapsulation to catalysis. They take advantage of the shared features of capsules and enzyme active sites – high local concentrations, prolonged encounters and amplified steric effects – to achieve selectivity,’ says Julius Rebek, an expert in encapsulation and catalysis at the Scripps Research Institute, California, US. ‘The report clearly shows that small capsules can lead to substrate selectivity by defining the space around a metal centre,’ agrees Steve Nolan, an expert in catalysing alkyne hydration at the University of St Andrews, UK, ‘This simple approach may indeed be applicable to other catalytic transformations.’

The group are now applying this strategy to enantioselective reactions, where steric interactions between the catalyst and substrate are responsible for the level of stereoselectivity.