Researchers in Spain and Sweden have synthesised and structurally determined a new kind of crystalline molecular sieve with extra large holes and chiral properties. Based on zeolite - a microporous crystalline solid - this new structure, which is almost mesoporous, could have many applications including uses in pharmaceutical chemistry, catalysis and separation techniques, say the scientists.

Molecular recognition is a subject of great interest in chemistry. This new zeolite material, called ITQ-37, is being hailed as a breakthrough as its structure should allow higher degrees of molecular selectivity and recognition according to Avelino Corma, who led the research at the Institute of Chemical Technology (ITQ), Polytechnic University of Valencia, Spain.

Previous thinking suggested that it would be impossible to synthesise such zeolites or, if it could be achieved, would create material that would be too unstable. However, the researchers have overturned this paradigm and demonstrated for the first time that it is possible to create a crystalline and nanoporous material with the capacity to recognise molecules according to size, structure and spatial orientation.

The Spanish team synthesised ITQ-37 by crystallising germanate and silicate gel, which was then dissolved in an organic molecular template. Using selected area electron diffraction and powder X-ray diffraction, the Swedish half of the team determined the sieve’s unique structure.

Materials with such ’extra large’ pores have been created before, but these have mainly been amorphous. This new material, however, has a highly organised crystalline structure, and contains the largest pores known to exist in zeolites - each about 20 ?ngstr?ms across (about 2 nanometers). What’s more, the pores in this zeolite are chiral, which should aid the separation of ’handed’ molecules. 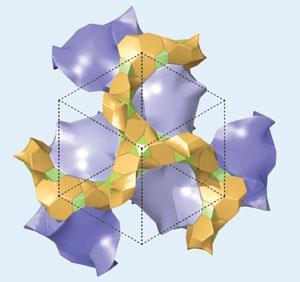 ’Scientists have been striving for over twenty years to find ways of preparing mesoporous chiral zeolites, but with no success,’ says Miao Yu, who researches zeolites at the University of Colorado, Boulder, US. ’This study solves this problem beautifully. I can imagine this new zeolite having wide applications.’

Zeolites are normally highly stable under harsh conditions, such as high temperatures and extreme pH conditions. Tests revealed ITQ-37 to be thermally stable, but affected by humidity. The material also turned out to be a potent catalyst, and Avelino suggests it may offer solutions in separation and molecule reactivity in chemistry and biotechnology.