An imaging system that makes cancers glow brightly under infrared light has entered human clinical trials, US researchers reported at the American Chemical Society’s Fall 2008 meeting on 19 August. The technique could help surgeons to cut out tumours without harming the healthy tissue surrounding them.

Fluorescence-Assisted Resection and Exploration (FLARE), developed by John Frangioni and his team at the Beth Israel Deaconess Medical Center (BIDMC) in Boston, US, uses dye molecules that fluoresce when they’re exposed to near-infrared light.

Targeting these fluorophores to bind to cancer cells means patients who have been injected with the dye can have their tumours show up as glowing, colourful shapes when viewed by a camera sensitive to infrared light. These images are then superimposed on footage from a normal camera, allowing surgeons to easily see diseased tissue in real time as they operate. Because the imager uses low intensity infra-red light from LEDs, the technique is also much safer than conventional fluoroscopy, where patients are exposed to x-rays to identify tumours. 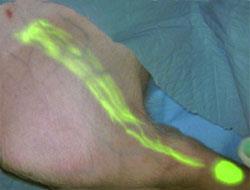 A number of research groups are developing fluorophore systems to selectively ’paint tumours’, but Frangioni’s appears to be the closest to commercial application. GE Healthcare has licensed the technology, which has been under development for eight years but could now be on the market in as little as a year, according to Frangioni.

It is in clinical trials and has already been tested in two breast cancer patients - in one case highlighting a lymph node (into which a nearby tumour might spread) that wasn’t spotted using conventional fluoroscopy. A cheaper handheld version of the device could also be available soon.

The technique, however, is limited at the moment by a lack of good contrast agents. The current trials use indocyanine green - a fluorophore that’s several decades old but does not specifically target cancer cells.

Together with his collaborators, Frangioni has developed his own contrast agent - a heptamethine indocyanine functionalised with four chains of biofriendly polyethylene glycol (PEG).

Bradley Smith of the University of Notre Dame, US, who designs fluorescent probes for imaging, says that while it can take over a decade to get a new drug through clinical trials, a fluorophore could be approved in as little as three to five years. ’As a chemist, I’m very excited that we can begin to invent probes that will have a fairly immediate impact on human health,’ he says.

Bradley warns, however, that designing new fluorophores will take time. For instance, the PEG molecules added to Frangioni’s dye to prevent it binding non-specifically to healthy tissue could also reduce its response to infrared light.