Hydrogels can release drugs one at a time

A hydrogel that can be programmed to release different protein drugs one after the other rather than all at once could simplify the delivery of complex therapeutic regimens for various diseases. Yong Wang and colleagues at the University of Connecticut, in Storrs, have used aptamers to functionalise a hydrogel made from natural polysaccharides to this end. Sequences of DNA that complement the aptamers then allow the proteins to be released at different stages.

Localised and controlled release of protein drugs is important because of the high risk of side effects if the proteins are released in a haphazard manner, or simultaneously in the case of multiple-protein therapies, used for tissue regeneration, for instance. Polymeric systems that use different pore sizes to control which protein is released and when are useful in sustained drug release but not when release time and rate need to change depending on the patient's response to treatment. 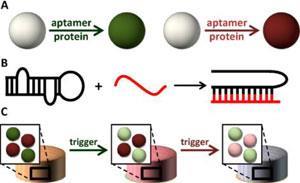 To address this, the researchers used two well-known aptamers, short peptide chains with specific binding targets, to control the release of drugs instead. The chosen aptamers bind to vascular endothelial growth factor (VEGF) and platelet-derived growth factor BB (PDGF-BB) and the team functionalised hydrogel particles with each of these aptamers in order to give the particles targeting ability towards those two proteins. In their proof of concept functionalised hydrogels, the team used streptavidin-coated polystyrene microparticles to hold onto the therapeutic proteins. For actual therapeutic use, biocompatible and biodegradable polymer particles would be needed.

The team found that in the absence of the trigger molecule, release of PDGF-BB from the native hydrogel was four times faster than it was from the functionalised hydrogel carrying the PDGF-BB aptamer-functionalisation. Similar release rates were seen with the hydrogel loaded with anti-VEGF aptamer. They then used flow cytometry to show how binding to the complementary sequences occurs. ‘Taken together, these results demonstrate that nucleic acid aptamers can efficiently entrap protein drugs in hydrogels and slow their release,’ the team says.

‘This is an important proof-of-principle paper for researchers in drug delivery,’ says Colin McCoy of Queen’s University Belfast, UK. ‘Aptamers have long been recognised as an excellent means of allowing triggered release of a protein in response to the presence of a complementary sequence. Extending this concept to multiple potential therapeutics is a very useful thing to be able to do, as it demonstrates how we might be able to achieve programmable release of several drugs in the right doses, at the right times and in the right places, from a single platform.’