Hydrogen bond under the microscope 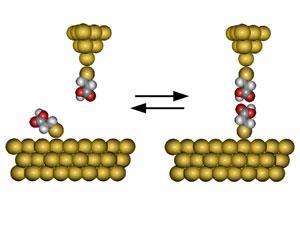 Scientists in Japan have designed a scanning tunnelling microscope (STM) tip that allowed them to measure electron transfer across a single hydrogen bond.

Researchers have, for many years, continued to report single molecule devices that act as tiny versions of common electronic components including wires, diodes, switches, transistors and even complex logic gates. However, among the myriad papers only a few have demonstrated the requisite techniques for directly investigating the electron transfer through these single-function entities despite this potentially underpinning the design of more sophisticated units and non-covalent assemblies.

Little is known about electron transfer in the non-covalent bonds of such supramolecular assemblies, according to Tomoaki Nishino of Osaka Prefecture University, Japan, and colleagues. They point out that the hydrogen bond is perhaps the most familiar of the non-covalent interactions and so have focused on exposing its electronic properties. To do this, the team has turned to STM and developed new molecular tips for this instrument using chemisorption of organosulfur compounds to modify the standard metal tip. This modification allows chemical recognition at the molecular level to be carried out, as well as the usual tunnelling current measurements.

The team explains how they have used a simpler approach than the DNA base modifications of other work, instead adding a carboxylated alkanethiol to their STM tip. This allows them to more directly probe a hydrogen bond between this group and a carboxylic acid attached to a gold surface.

The researchers found that the hydrogen bond between the molecule on the STM tip and the molecule on the surface conducts electrons more effectively than a short-range s-bond found between covalently bonded atoms. Long hydrogen bond connections showed weaker electron transfer. The team explains that the presence of hydrogen-bonding in a molecular junction significantly affects its transport properties and that this might be tuned by controlling the length of the hydrogen bond connections.

‘The experiment is not particularly well defined,’ says Markus Lackinger, of the Ludwig Maximilians University, Munich in Germany, ‘but the results are significant and it appears that the control experiments were carried out carefully. As anticipated the conductance is quite low, but not zero.’ However, he has some reservations about its implications. ‘The calculation of the electronic structure is of limited use, because it cannot directly be compared with the experiment. For this, transport calculations that build on the electronic structure calculations would be necessary. In summary, quite interesting, but I doubt that this paper lays the foundation for molecular electronics on hydrogen bonding.’