If everything is chemistry then I need to do chemistry 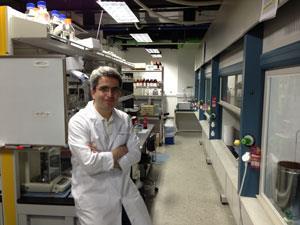 Cafer Yavuz is a professor at the Korea Advanced Institute of Science and Technology (KAIST) in Daejeon. His group design and make new materials from oxide and organic building blocks to offer sustainable solutions for energy and environmental issues.

How did you get into chemistry?

My father is a teacher but he always wanted to be a professor. I think someone said you usually follow your parents’ dreams rather than their current jobs. I always knew I wanted to be a professor. My interest in chemistry goes back to my high school years. I represented Turkey twice at the International Chemistry Olympiad. Of course my interest in chemistry started before that. One of my mentors at high school got me interested in chemistry because he taught how it is related to life in general. He spoke of daily life items like soap, shampoo, fabric, dyes and drugs. He said everything is chemistry. So I thought – if everything is chemistry then I need to do chemistry. I saw I could make an immediate impact if I studied chemistry. I still keep that in mind – that I need to make an immediate impact on people’s lives.

I understand you moved to South Korea in 2010 to start a new group. What was the motivation behind this move?

Before the move I was in the US for about 10 years. I got my PhD in Texas at Rice University and was a postdoc at the University of California, Santa Barbara. My postdoc advisor, Galen Stucky, had a very distinguished position here at KAIST in Korea and he came here briefly to do some teaching and other things. Galen is no longer involved here but his previous involvement helped me to think this position was a possibility. I came here and I realised it’s a great environment with highly motivated people.

What are the main differences between the institutions you worked at in the US and KAIST?

A lot of things are the same like buying equipment, writing papers, teaching, making a group, having students. Although there is one advantage when buying chemicals for research: in the US it would take a couple of days or sometimes a week for a chemical to arrive, but in Korea, if they have it in stock, it will arrive in hours. Once I ordered a chemical at 9pm and it was delivered at 9am the next day – that was quite remarkable!

That must make quite a difference.

That makes you be in game. Usually you have an idea that you want to test quickly. If you don’t have a chemical, the chances are you will have more ideas in the meantime and you will forget the original idea. It helps a lot for me to be able to execute any ideas within the same week. I will give you an example: three days ago I asked my postdoc to run an experiment, he ordered the chemicals the same day, he got the chemicals the next day and he had his first results today, all within a week. This is blazing speed. This is how it should be done. The only thing limiting you then is yourself – you have to have the ideas.

You recently published a paper about the limitations and high pressure behavior of a metal–organic framework (MOF) for carbon dioxide capture. What do you think will be the next big breakthrough in this area?

In general I’m not particularly fond of MOFs, although they are spectacular in many ways. I am much more interested in porous polymers, which by definition do include MOFs, but order in the super structure is not necessary. I would say porous polymers have great applicability over other similar materials.

I come from a nanotechnology background and have made magnetic nanoparticles to do different things including water treatment. One thing I realised for nanomaterials in general is you have to immobilise nanoparticles onto some support. If you are doing a catalysis or absorption, chances are you will have to attach your nanoparticles somewhere. And the problem when you attach your nanoparticles somewhere is that they lose lots of their surface area and you are losing many properties before you start to do anything with them. So I realised that I needed to make something that can host these particles and that brought me to porous polymers, which are sturdy, stable, extremely cheap materials that we can make in bulk quantities. And yet they have pores that can host nanoparticles inside themselves.

I think this is the direction the materials chemistry field will go in. I think we will start seeing more nanocomposites between porous polymers and nanoparticles. It unites the best of both worlds – the nanoparticles can reach their full capability of doing a chemical reaction without losing any of their properties and aggregation problems won’t happen because the nanoparticles are trapped inside the walls of the porous polymer. They are not attached to the porous polymer, they are just in the voids, rattling and bumping around so they are free to roam within the cage but they’re in a massive structure which can be easily integrated in industrial processes. Because industry runs on heterogeneous practices this would easily fit into that scheme. If you just apply nanoparticles themselves then you have aggregation problems.

MOFs could have been a good support for nanoparticles but one problem with MOFs is that they are too unstable against things like water or steam or temperature. A colleague once said to me, ‘how can you expect a crystal that has been made out of equilibrium to stand against equilibrium breaking impacts?’ So that was a very good point to me – some rightfully say MOFs are inherently flawed.

Porous polymers are robust network structures with permanent pores. They are made via favourable, fast reactions not equilibriums. Porous organic polymers in particular have well-defined functional groups. You know the chemistry in them and you know exactly how the bonds are linked. Every time you make that porous polymer you essentially produce the same structure with the same surface area, just like MOFs. So that’s why porous polymers are very reliable structures for different applications.

What I do primarily with porous polymers is to trap carbon dioxide in them. 80% of my funding at the moment is to look at carbon dioxide capture and separation and possibly conversion later on. In our research program, three molecules we are very much interested in are carbon dioxide, methane and water. Carbon dioxide capture requires certain parameters and certain behaviours, especially water resistance of the solid. That is where MOFs really suffer – under water and under steam conditions. Of course there are a few MOFs that have emerged recently that are stable in water but in general they are not.

How close do you think we are to porous networks being used to capture carbon dioxide on a large scale?

I think we are very close. I think within a year we will see a major development in carbon dioxide capture. The first round is always the chemistry, how can we pull this off, you don’t care about anything like costs. We are already passing that stage. We know what works and what doesn’t. Now the question is about making it affordable. I think this is the stage of developing the technology. And I think many examples have already emerged.

In our lab we have developed a structure which is actually profitable in comparison to existing carbon dioxide capturing processes. But it is too early to say that we have solved the problem. I will certainly not make that call anytime soon. We recently published the COP-1 structure in Journal of Materials Chemistry which has a very small price with respect to what it does. We recently got a major Korean company – Hyundai, who have a department on developing carbon dioxide capture – to fund us almost $400 thousand dollars a year to commercialise the technology that we have developed. So I’m very hopeful that the technology will be available within a year. If it’s not us, then someone else will do it.

Can you do anything with the carbon dioxide once it has been captured?

Some scientists say that because of that problem, the capturing technology may not even be implemented, because we don’t know what to do with that much carbon dioxide. And that’s where my next interest kicks in which is a methane plus carbon dioxide reaction, known as the dry reforming reaction. I believe that reaction will be our answer to carbon dioxide conversion.

Honestly, I don’t believe in artificial photosynthesis and I have reasons for that – it takes more than 20 steps and so many enzymes to make the glucose from carbon dioxide and water and sunlight and that’s a lot of work and even nature could not perfect that into one or two steps. Why should we, the more recent beings on the planet be able to figure that out? It’s an uphill battle to replicate and try to overrun what nature does uneasily.

But if you think about reducing carbon dioxide with something that you have in abundance like methane then it’s a simple chemical conversion, you’re taking a chemical with a higher oxidation state and one with a lower oxidation state and you meet in the middle. It’s a chemically sound conversion of methane plus carbon dioxide into different chemicals such as syngas mixture and we have an awful lot of methane on the planet. Not only do we have the natural reserves but there are gas hydrates in the ocean. According to estimates there is twice as much of gas hydrates as there are of all known conventional fossil fuels combined. This means we have lots of methane at the bottom of the ocean. It’s good and bad at the same time. The good news is we have a lot of methane to burn. The bad news is that as the oceans get warmer the gas hydrates will be ejecting a lot of methane into the atmosphere. Methane is 23 times more potent as a greenhouse gas than carbon dioxide. Not to mention, the gas hydrates are very sensitive to changes in temperature and pressure in the ocean.

So you could solve two problems at the same time?

Exactly! If we can show that dry reforming is a viable method then we are eliminating both problems. People will have more reasons to harvest methane from the ocean. Industry is not using the dry reforming reaction right now because they use another reaction to make the syngas mixture, called steam reforming, which is basically methane plus water. Because of the energetics, steam reforming is less uphill than using carbon dioxide and methane as the activation energy and enthalpy change with carbon dioxide is much higher. This is a challenge that scientists need to tackle.

I like challenges and I like to fix things. So that is why I am taking this as my next challenge. I’m making porous polymers with embedded nickel catalysts for this dry reforming reaction. Of course our existing challenges still continue and are not going to end anytime soon. But these new challenges keep me happy.

What do you do in your free time?