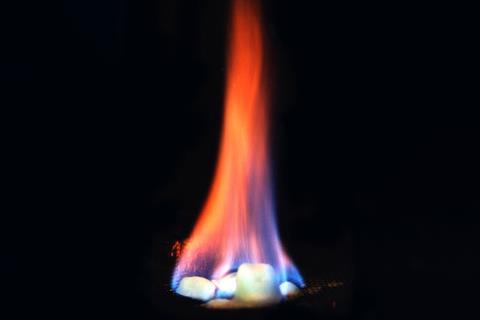 Gas hydrates trap methane and other gases in a clathrate compound of frozen water. The amount of methane estimated to be trapped in gas hydrates in Chinese waters is equivalent to the energy consumption of the nation over 25 years at current levels

In a world first, China has successfully exploited so-called ‘flammable ice’ or gas hydrates on the seafloor. The six week trial has been widely lauded in China as a major technological breakthrough.

Gas hydrates are formed at low temperatures and high pressures and consist of a cage of frozen water molecules in which gases can be trapped. Given that large deposits of hydrates – also known as clathrates – that hold methane have been found on seabeds around the world there has been great interest in tapping them as an energy source.

According to Guangzhou Marine Geological Survey (GMGS), by 21 June total production of methane at the drilling site southeast of Hong Kong more than a kilometre underwater had extracted 230,000m3 of methane, with an average daily production of 6800m3.

Methane and other gases can be extracted from gas hydrates via depressurisation, which was reportedly used in the Chinese trial. Technical details of the process were not revealed, but according to Pang Mingli, a senior natural gas expert at Beijing-based National Institute of Metrology, engineers normally drill holes to reach the free gas layers below the gas hydrates, often a mixture of methane and other gases such as carbon dioxide, nitrogen and hydrogen sulfide. The outflow of the free gas reduces the pressure of the surrounding gas hydrate, leading them to decompose into water and gas. By controlling the release of the pumped gas, engineers can control the gas hydrate pressure, so as to extract the methane in an orderly manner. The disadvantage is the depressurisation is the process is quite slow.

It is estimated that after decomposition, 1m3 of gas hydrate can release 164m3 of methane. Chinese engineers have also found two rich gas hydrate sites in the South China Sea. ‘We estimate that in total, China may be sitting on gas hydrates equivalent to 80 billion tonnes of oil,’ Li Jinfa, deputy director of the China Geological Survey (CGS), who is also deputy director of China’s steering committee on gas hydrate exploitation, told state news agency Xinhua. Last year, the entire country’s energy consumption was equivalent to 3.1 billion tonnes of oil.

With the new advances, Li said that China is expected to drill for gas hydrates commercially by 2030, a goal that the CGS announced in 2014 .

Despite state media’s cheerleading for the advance, some reservations have been expressed openly. Liu Ke, a chemist at Southern University of Science and Technology, cautions that the daily production rates of up to 10,000m3 of methane is in fact very small, compared with any commercially exploited natural gas well. ‘The achievement is not easy, but it mainly proves that gas hydrates can be continuously drilled out,’ he notes. ‘Whether gas hydrates can be commercially used depends on its production costs, which will certainly be higher than natural gas due to gas hydrates’ solid form.’ He adds that given the US’s success with shale gas, which has lowered worldwide natural gas prices by 80% in recent years, the production cost will be a big challenge for gas hydrates. There are also concerns that mining gas hydrates will damage delicate seafloor ecosystems or release large amounts of methane, a potent greenhouse gas.

Ye Jianliang, GMGS director and field manager of the gas hydrate drilling operation, told Xinhua: ‘In the energy sector, from petroleum to gas to shale gas, including the exploitation of coal, we had simply followed the west, but this time, we are taking a leadership position, at least temporarily.’ He conceded that they were still huge technical difficulties to overcome too as the process is so new.

Responding to public concerns about drilling’s environmental impact, Ye said during a separate interview with Southern Daily that a dozen field trips were made to examine baseline environmental scenarios prior to drilling. These included measurements of carbon dioxide and methane, and the elevation and subsidence of sea floor and since drilling started, these indicators have not changed.

John Ripmeester, principal research officer in the materials structure and function group at the National Research Council of Canada, hints that the release of methane from deep ocean drilling needn’t be too much of a concern. ‘There is a steady release of methane from various sources into the water column,’ says Ripmeester. ‘So far there has been no obviously identified hazard from the decomposition of hydrate. Most methane in the water column tends to be digested by microbes.’