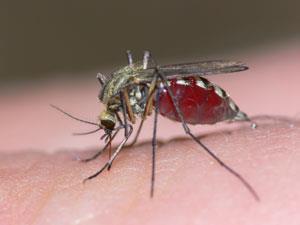 Antimalarial drugs with increased in vitro activity have been developed by scientists in Portugal and the US. These novel drugs, called primacins, are active against two stages of malarial infection and are more active against liver parasites than the current clinical use drug, primaquine.

Mosquito-borne malaria is a highly infectious and potentially fatal disease that affects millions of people every year. When humans are bitten by a malaria-infected mosquito, they undergo a clinically silent liver-stage infection when thousands of malaria parasites (merozoites) are released into the bloodstream. Drugs that are active against liver parasites are rare and currently, primaquine is the only drug in clinical use. However, its use is hampered by low oral bioavailability and high hemotoxicity, making it unsuitable for pregnant women, children and the elderly.

The new primacins, developed by Paula Gomes from the University of Porto, Portugal, and co-workers combine primaquine with cinnamic acids, which are also known for their antimalarial activity. ‘This ‘‘covalent bitherapy’’ involves linking two molecules with individual intrinsic activity into a single agent, thus packaging dual activity into a single hybrid molecule,’ explains Gomes. ‘So far, none of the antimalarials reported in the literature combine these two antimalarial pharmacophores. Moreover, the chemistry underlying their preparation is simple and cheap, which is our constant concern when dealing with development of antimalarials, as malaria is mainly endemic to low income countries.’

Larry Walker, a professor in pharmacology at the University of Mississippi, US, agrees that the work is promising, but says that further experiments and animal testing are necessary. ‘What is new here is the finding that, using this liver stage parasite culture model, which is fairly new and very useful, they can show improved potency of these derivatives. This is really the most important feature of this study,’ he says. ‘However, it is important to keep in perspective what still needs to be done to have a real advance for this drug class. What is needed is to show that it improves activity in animal models; and more importantly, shows reduced hematological toxicity compared to primaquine.’

Gomes agrees that in vivo tests are the way forward: ‘The next step consists of establishing how active our compounds are in vivo, how are they absorbed, distributed, metabolised and eliminated,’ she says. ‘If the compounds are confirmed to be highly active in vivo, we'll then step forward into the so-called pre-clinical assays.’