UK losing attraction as business base

A major chemical firm’s decision to relocate its headquarters to Switzerland because of corporate taxation concerns may mark a surge in chemical and pharmaceutical companies relocating their head offices outside the UK.

Such an exodus could see investment in chemistry-based manufacturing and R&D in the UK fall even lower, despite having already dropped well below pre-2008 levels. If the inclination to relocate spreads, the recently announced cut in corporation tax on income from patents from 2013 may prove to be insufficient to reverse a trend of chemical and pharma firms moving operations abroad. 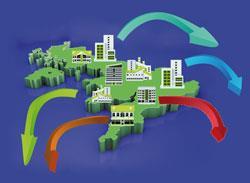 Business conditions in the UK may prompt firms to consider emigrating

In the last nine months of 2009, investment in the chemicals sector averaged around ?600 million per quarter. In the last of those quarters it had declined to ?515 million, according to figures from the UK Office for National Statistics.

’Before 2008 the average was around ?750 million so it is running at average levels 20 per cent below those before the recession, while in the last quarter it was down by about a third,’ explains Alan Eastwood, economic advisor to the UK’s Chemical Industries Association.

’Obviously poor demand and the uncertainty of the economic outlook are a major factor,’ he adds. ’But even if companies want to invest they are having problems obtaining money from the banks. At the same time they are having to reduce debts because of financial pressures.’

These pressures certainly played a part in chemicals firm Ineos’s recent decision to move its headquarters from Lyndhurst, UK, to Lausanne in Switzerland - with the company believing the reduced corporation tax rates in Switzerland will cut its tax bill by around €450 million (?394 million) between now and 2014. The company, the UK’s largest chemical firm and the third largest in the world, has been trying to restructure debts for the past year after the downturn caused demand to drop.

According to Ineos spokesman Richard Longden, the company remains committed to its UK sites and the reduced tax burden will enable more investment for its facilities, including those in the UK. ’Our Grangemouth and Runcorn sites remain an important part of Ineos, which continues to support nearly 5000 jobs in the sector, the relocation of our headquarters will see 20 roles move to the new office,’ he told Chemistry World  .

Last month the firm completed the sale of its Cheshire-based fluorochemicals business to Mexichem, a leading Latin American chemicals producer. Ineos is also discussing the sale of a stake in its refinery at Grangemouth, Scotland, with potential buyers, one of them the leading Chinese petrochemicals company, PetroChina.

The sentiment that the UK may no longer be the best base for companies could be spreading to the pharmaceutical sector as well. After announcing last month the closure of its R&D unit at Charnwood, UK, that will see 1200 jobs go, AstraZeneca (AZ) has confirmed plans to divest active pharmaceutical ingredient (API) plants in the UK as part of global plans to outsource all its API production.

’Although they will probably be under different ownership, this does not necessarily mean that the plants will be closed because their costs may be internationally competitive,’ says an AZ official.

Meanwhile Roche and Novartis, major Switzerland-based pharma companies, have denied plans to pull out of the UK because of concerns over cuts in NHS drug prices. London-based newspaper The Guardian   revealed UK government documents, disclosed under the country’s Freedom of Information Act, which showed that ministers had met senior executives from the firms to persuade them the country is becoming ’a more favourable environment for pharmaceutical companies’.

However, GlaxoSmithKline has responded positively to the tax cuts on earnings from innovative medicines - dubbed the patent box - by announcing plans for a UK-based biopharmaceutical manufacturing plant and other facilities amounting to investment of over ?500 million.