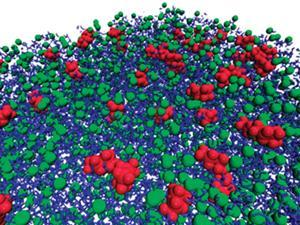 Research by scientists in the UK suggests that small changes in the nature of binary ionic liquid systems can significantly alter their surface composition. The findings may aid the design of ionic liquid films for applications such as gas capture and supported catalysis, where surface adsorption is essential.

Studies on simple one-cation–one-anion mixtures have previously revealed that the outer layers contain a greater concentration of alkyl chains than in the bulk, reducing the number of accessible surface anions. To better understand the behaviour of more complex one-cation–two-anion mixtures, Kevin Lovelock and colleagues at Imperial College London probed the outer surface of several binary ionic liquid systems, expecting to find subtle differences between the concentrations of anions at the interface.

Instead, the team were surprised by the drastic differences brought about by small changes in the nature of the counter anions. Anions with weaker cation–anion interactions were present in much greater numbers at the surface than should be predicted for ideal mixtures. Notably, anion size had little influence – intermolecular interactions dominated.

At the heart of the study lies an underused scattering technique known as low-energy ion scattering (LEIS), particularly suited to characterising the atomic composition at the surface. ‘Whereas other techniques such as XPS (x-ray photoelectron spectroscopy) probe around 10 atomic layers, LEIS exclusively probes the outer surface,’ Lovelock tells Chemistry World.

The study may have implications for supported ionic liquid phase (SILP) catalysis. By getting the surface chemistry right, less of the active species may be needed in the system.

David Cole-Hamilton, a SILP catalysis expert at the University of St Andrews, UK, suggests two improvements could arise from tuning the surface make-up. ‘A lower polarity of the surface layer might help increase the rate of transport of non-polar substrates across the surface into the bulk. Alternatively, there is a possibility that the catalysis could occur at the surface. For instance, if the catalyst were positively charged, it should be concentrated at the surface if its interaction with the anions is weaker than that of the solvent cation.’ However, he indicates surface chemistry isn’t the only factor controlling catalysis: ‘For thin films, reactions are not usually limited by mass transport across the interface. For thicker films, mass transport becomes a problem, but this is more about diffusion within the ionic liquid than about mass transport’.

Lovelock and colleagues are now keen to test how the surface chemistry manifests itself in terms of SILP catalyst performance.