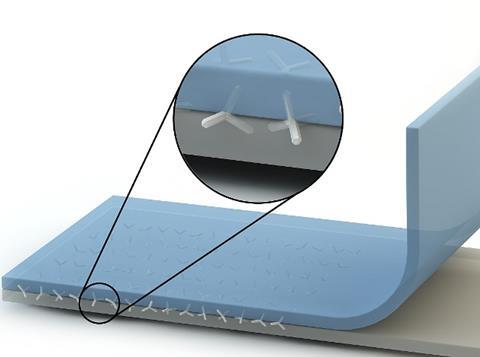 German researchers have developed a method for sticking together two of the most non-stick polymers known. Adding spiky nanoparticles between layers of Teflon and silicone bonds the layers together, and could form a complementary technique to join other polymers in situations where chemical or plasma treatments to increase adhesion are undesirable.

Polymers like poly(dimethylsiloxane) (PDMS) and poly(tetrafluoroethene) (PTFE) are useful precisely because of their non-stick properties. They are chemically inert and have low surface energy, so the forces that would usually stick polymers to each other – van der Waal’s interactions, diffusion of the two materials into each other, or chemical reactions on the surfaces all fail when trying to join PTFE and PDMS to each other.

The alternative, says Rainer Adelung from the University of Kiel, is to mechanically interlock the layers by ‘stapling them from the inside’. To do this, his team prepared a strip of PTFE, and before it was completely dry and solid, sprinkled on four-pointed tetrahedral nanocrystal stars of zinc oxide using an ordinary household sieve. They then added a layer of PDMS. Because the legs of the nanocrystals are embedded in both polymer surfaces, and because of their concave shape, they act as hooks to hold the layers together, Adelung explains.

‘PTFE is a notoriously difficult polymer to bond,’ says David Packham, an adhesion expert from the University of Bath, UK. He adds that various quite dramatic ways have been developed for bonding other materials to PTFE, such as plasma treatment or chemically removing some of the surface fluorine atoms with sodium in liquid ammonia. ‘This would be very simple,’ he says, ‘if all you have to do is sprinkle a magic powder on the surface.’

However, Packham notes that the peel strengths of the team’s joined polymers are still relatively modest. ‘I’m not sure I’d like to stick something down with it and send it through the post,’ he says, ‘but it’s clearly a significant increase in adhesion and certainly shows potential.’

Adelung agrees that the strength of the bond will need to be improved, but he points out that it’s already about as strong as sticky tape on glass and, in some cases, when the team try to unpeel the PDMS strip from the PTFE, the PDMS would rip or disintegrate before the layers parted. ‘We’re working with a local company to scale up the process.’