An international team of researchers has used attosecond laser pulses to track the movement of electrons in molecules for the first time. The breakthrough suggests that attosecond lasers will soon enable scientists to address problems in chemistry and biology, which until now were too complex for attosecond science.

At just 10-18 seconds, an attosecond is to one second what one second is to the age of the universe. For almost a decade scientists have been able to create laser pulses this brief, in doing so opening up a new level in atomic probing. Unlike femtosecond pulses, which can only ’freeze’ the position of atoms and molecules, attosecond pulses can freeze the position of the orbiting electrons themselves.

Since their development, attosecond laser pulses have been used to investigate a variety of processes, including the exciting and ionisation of atoms, and electron dynamics in solids. Yet so far they haven’t been used on molecules, which are more complex. One goal has been to see how electric charge redistributes and how it affects the nuclear movement once a molecule is ionised.

This is exactly what Marc Vrakking of the Max Born Institute for Nonlinear Optics and Short Time Spectroscopy in Berlin, Germany, and colleagues have attempted to do. The team, which includes researchers in Italy, the Netherlands, Germany, Sweden, France, Columbia and the UK, has localised the position of electrons with attosecond resolution within hydrogen - nature’s simplest molecule - as it is ionised.

In the experiments, the researchers fire an ultraviolet attosecond laser pulse at a hydrogen molecule to strip it of one electron, before using an infrared laser to break the molecule in two. By varying the delay between the ultraviolet pulse and the infrared beam, they could build a picture of how the remaining electron moves within the molecular ion left behind, and how both electrons affect the nuclear rearrangement, or splitting. 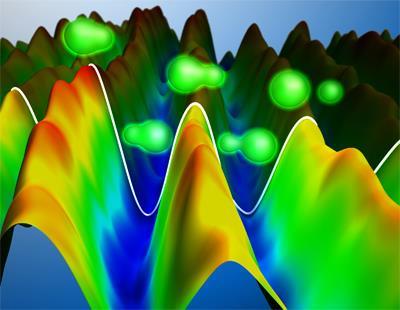 Electron dynamics in molecular hydrogen following photoionisation by an attosecond laser pulse. The remaining electron in the molecule (depicted in green) is measured experimentally and shown as a mountain landscape. Hills and valleys correspond to a higher probability of finding the electron on the left and right side of the molecule respectively

Vrakking and coworkers discovered that the coupling of the electrons to the atoms plays a strong role in the ionisation process. In the past, theory has had to include the so-called Born-Oppenheimer approximation, which effectively says that electrons are so small and fast that they readily adapt to the motion of the atoms - but now scientists will be able to understand how this approximation breaks down. Yet the researchers also found an unanticipated feature: that not just one, but both electrons can become excited before one finally leaves the molecule.

Ferenc Krausz, a leading attosecond physicist at the Max-Planck Institute for Quantum Optics in Garching, Germany, says the work ’constitutes an important milestone in the evolution of attosecond science.’

’Attosecond physics and technology has so far centred on studies of simple - in most cases atomic - systems in which the outcome of the experiment could be safely predicted, with the primary aim of validating the novel methodology,’ he adds. ’[These] experiments extend the applications of attosecond metrology for the first time to more complex systems.’

Vrakking explains that his group’s next goal is to try to repeat the experiment without the infrared laser, which presently does as much to steer the molecule’s dynamics as to probe them. ’We couldn’t argue that it’s been a passive observer,’ he says.