Graphene oxide film allows water through but not helium, opening up possibilities for separation technologies

UK researchers have created a graphene-based membrane that allows water through but not helium. The discovery of such membranes might ultimately have applications in a whole range of industries including effective separation of hydrogen from liquid or gaseous mixtures for fuel production. 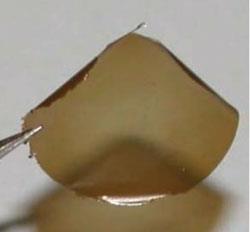 Graphene co-discoverer Andre Geim, of the University of Manchester, and colleagues there and at the University of Science and Technology of China, in Anhui, have developed a graphene oxide membrane that is 1010 times more water permeable than it is to helium. They explain that the discovery might not only have applications in separation technology but could help them answer fundamental questions about the behaviour of matter at the molecular level.

The first observation of graphene was by Oxford chemist Benjamin C Brodie in 1859, but it wasn’t until the more recent Nobel prize winning development by Geim and colleagues in 2002-2003 that graphene - a single atomic plane of graphite - caught the attention of chemists, physicists and materials scientists. Its unique properties of strength and flexibility and its optoelectronic behaviour have hinted at countless applications in engineering and future electronics systems.

One property that was considered watertight was the impermeability of graphene to liquids and gases. The hexagonal array of carbon atoms, resembling a miniaturised sheet of chicken wire fencing, is densely filled with electron clouds and has no gaps through which molecules might slip. However, graphene oxide layers form laminated sheets comprising micrometre-scale crystallites interlocked and layered on top of each other. Such materials resemble the natural mineral nacre or mother-of-pearl  that lines the shells of many sea creatures.

Geim’s team tested their synthetic graphene oxide ’nacre’ under various gases and so essentially observed no permeation of helium, nor hydrogen, nitrogen or argon. ’The actual rate of permeation was below the observation limit of even the most sensitive helium mass spectrometer,’ Geim tells Chemistry World. The researchers then tested various liquids - ethanol, hexane, acetone, decane and propanol - none of which leaked through. But, when they tested water, it poured out of the membrane - as measured by evaporation rate. In fact, the rate of evaporation was as high as if the membrane were not present.

The team’s suggestion for why this material has such incompatible permeability to helium and water is based on the idea that there can be low-friction flow of a monolayer of water through two-dimensional capillaries formed between closely spaced graphene sheets. Water’s ability to form a network of hydrogen bonds between molecules in the liquid state once again giving rise to anomalous behaviour. In contrast, helium atoms remain discrete and isolated at these temperatures and so cannot wend their way through the putative graphene capillaries in a concerted manner.

’The discovered differences in permeability for various gases and water are truly outstanding,’ says Alex Smolyanitsky of the US National Institute of Standards and Technology, in Boulder, Colorado. ’As the authors point out, the reported nanocapillary effect can be utilised in the separation of materials, assuming, of course, the membrane performance is not subject to significant degradation over time.’