Life may have begun in a tiny water droplet 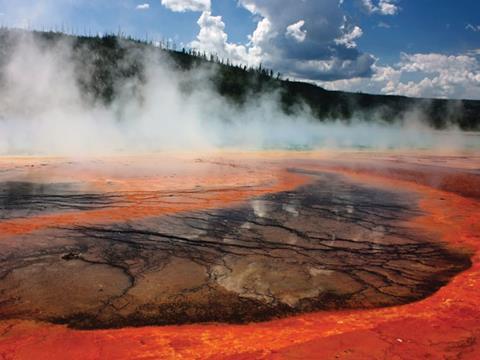 Early life could have got its big break in water droplets

Chemical reactions run much faster and more efficiently when they take place in tiny droplets rather than in freestanding water – such as a puddle or a lake, say researchers. The advance could help unravel how life originated on our planet, unlock secrets of prebiotic atmospheric chemistry and help synthesise new molecules much more efficiently.

One theory on the genesis of life is that it began in evaporating aerosol droplets. As these droplets evaporated the space for the small, simple molecules that they held to move around freely shrank. This, in turn, increased the concentrations of these reactants, creating just the right conditions to trigger efficient prebiotic synthetic chemistry. As these small molecules reacted with each other, they made bigger and bigger molecules and, eventually, life began. But exactly how this happened remains a mystery.

Now a team led by Sylvain Ladame of Imperial College London, UK, suggests that evaporation may not even have been necessary. They propose that reactions at a droplet’s surface alone could have led to efficient synthesis of prebiotic products. ‘The small size of microdroplets means that the surface available for the reaction to happen reduces, leading to limited freedom of movement,’ says Ladame. ‘That’s why the reaction of formation of larger molecules from smaller ones – and, ultimately, life – can be enhanced when confined in tiny droplets.’

To study this phenomenon, the researchers synthesised two non-fluorescent small molecules – an amine and an aldehyde. The reaction between the two forms a fluorescent imine. They then investigated the efficiency and kinetics of this reaction under different conditions: first by putting the reactants in freestanding water, and then enclosing them in tiny droplets, between 2.5picolitres to 160picolitres in volume.

For each system, the researchers followed the course of the reaction by monitoring the solutions’ fluorescence. They found that the reaction proceeded as much as 45 times faster in the microdroplets than in freestanding water.

The scientists think that in droplets below a certain size that have a large surface area and a small volume, weak interactions are sufficient for a reaction to take place at a droplet’s surface. Once the product is formed, it can diffuse and spread within the droplet, where it accumulates. 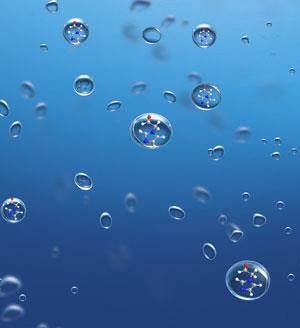 ‘This mechanism may provide a solution to the problem of efficient prebiotic synthetic chemistry necessary for the origin of life,’ says Ladame. ‘Our results show that compartments the size of biological cells can be favourable environments for synthetic chemistry and that droplets, or other systems with high surface to volume ratios, may have played an important role in synthetic chemistry in the prebiotic world.’

The results could help explain how large molecules may have formed in the prebiotic world, ‘by bringing together smaller building blocks that would have otherwise never met or never been able to react with each other, leading to life,’ says Ladame.

Next, the researchers plan to study multistep chemical reactions in microdroplets, such as the formation of larger molecules from small fragments. They also want to mimic aerosol formation at the surface of oceans – to look at the combined effect of confinement in droplets and evaporation on reaction efficiency.

The study ‘could provide inspiration for new strategies for enhancing the yield of synthetic reactions’, says Tuomas Knowles at the University of Cambridge, UK, who did not take part in the research.

Veronica Vaida, a chemist at the University of Colorado Boulder in the US, say that the results are important because they ‘allow us to think in a new way about chemistry with unforeseen consequences for building complexity, important in fields such as the origin of life and contemporary atmospheric aerosols’.