Chemists in Japan have built a rotary motor driven purely by light shining onto a polymer film.

The film contracts and expands as light shines on it, because it is a liquid crystalline elastomer: a material with long polymer chains like rubber, that also incorporates ordered arrays of rod-like molecules - liquid crystals, such as those used in flat-screen TVs. Ultraviolet light changes the packing of the liquid crystal molecules, making the elastomer shrink. Exposing the material to visible light reverses this change, and the polymer film expands.

The liquid crystal responds to light because it is made using azobenzene molecules, whose central nitrogen-nitrogen double bond can adopt two different configurations. If both halves of the molecular chain are on opposite sides of the N=N axis (trans-configuration), the molecules are straight and pack easily into liquid crystals. After exposure to UV, the halves end up on the same side (cis) and the whole molecule adopts a more kinked, boomerang-like shape.

Tomiki Ikeda’s group at the Tokyo Institute of Technology at Yokohama looked for ways of using this effect to turn light into motion. First the researchers created a cylinder of liquid crystal elastomer and looped it around two wheels, one 10mm wide and the other measuring 3mm across. 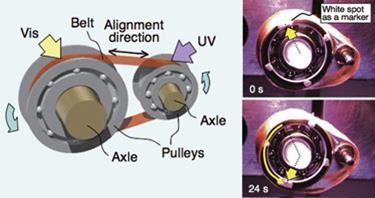 By shining UV light on to the top of the smaller wheel and visible light on to the top of the larger one, the researchers managed to get the wheels turning. According to the team, the film contracts after it’s exposed to UV light pulling the tape to the left. At the top side of the larger wheel, where the tape’s exposed to visible light, it expands again pushing the wheel counter-clockwise.

Edinburgh chemist David Leigh, who has developed a molecular motor, welcomes the advance. ’Examples such as this, where the effects of controlled molecular level movement are extrapolated across the length scales to the macroscopic world in a very direct and highly visual way, are extremely important illustrations of what can be done, even in these very early days of the field,’ he says.

For Ikeda, the tiny wheels turned by the light herald greater things to come. ’My dream is an all-plastic car that can go back and forth by exposure to sunlight,’ he told Chemistry World. ’It will have two sets of wheels covered with belts of photomobile polymer materials. By filtering the sunlight with plastic sheets, one can irradiate specific parts of the plastic belts with either UV or visible light to enable the plastic car to move.’