Researchers in Japan produce concentrated 'solvated' electrons in cement, in both a molten and glassy state

Concrete is heavy, tough and - you might think - a reliable insulator. But researchers in Japan have shown that, by doping it with free electrons, liquid cement can transform into a substance with metal-like electrical conductivity. According to the researchers, the surprising transition could lead to new types of semiconductor.

It has been known since the beginning of the nineteenth century that free electrons can be trapped in polar solvents such as water and ammonia. When an alkali metal is dissolved in ammonia, for example, the valence electrons are released into the solution, giving a deep blue colour when dilute and a bronze colour when more concentrated. These ’solvated’ electrons are relatively stable, because each one is surrounded by an envelope of ammonia molecules.

Hideo Hosono and colleagues from the Tokyo Institute of Technology have now shown that an equivalent phenomenon can turn mayenite (12CaO.7Al2O3) - a metal oxide and a component of alumina cement - from being a stalwart insulator into a metallic conductor. Hosono’s group performs the feat at high temperatures, reducing the mayenite with titanium. This partially replaces some of the oxide ions in the mayenite lattice with solvated electrons, which become trapped in a ’cage’ of atoms. 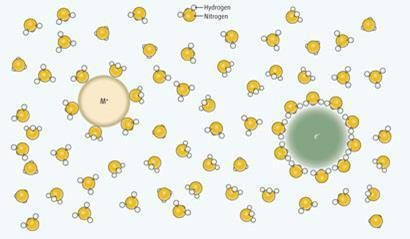 When an alkali metal is dissolved in ammonia, the result is free electrons

With these solvated electrons, the mayenite goes from transparent and colourless to dark brown. In the molten state, the mayenite exhibits metallic conduction five orders of magnitude higher than usual. In the solid, glassy state, the mayenite is less conducting, like a semiconductor. Here, Hosono’s group believes the caged electrons pair up into correlated spin states.

James Dye, an expert in solvated electrons at Michigan State University in the US who has been following the work of Hosono and his team, calls it an ’exciting extension’ to their previous study in 2003, when they first reported that electrons could be doped into mayenite. ’The clear evidence for metallic properties and for electron pairing is remarkable and opens the door for a number of studies of electron-electron interactions and electron-pair conductivity,’ Dye says.

Hosono thinks development of materials with solvated electrons such as mayenite could lead to new, glassy semiconductors. His group now plans to analyse the mayenite structure further to see how electrons move through it. ’We may realise stable solvated electrons in various systems and temperatures by utilising a suitable nanostructure,’ he says.