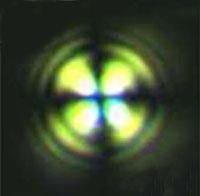 But liquid-crystal ordering is easy to disturb. If a liquid crystal is spread on a surface, even the tiniest scratch or speck of dirt can change the local order. This is why liquid-crystal displays must be made in ultra-clean environments.

Nicholas Abbott of the University of Wisconsin-Madison and colleagues have found a way to exploit this sensitivity to contaminants. They dispersed fine droplets of 5CB in water, and then used polarised light to examine the resultant ordering. In spherical microdroplets, the 5CB molecules could not realise their preferred alignment, and instead stayed in a disordered, ’frustrated’ state. However, once the researchers added very small concentrations of E.coli endotoxins - less than 1pg/ml - the 5CB molecules were able to relieve some of their frustration and align themselves.

According to Abbott’s group, the initial frustrated state of the liquid-crystal molecules leaves open defects, which the E.coli endotoxins interact with. Abbott thinks that this change in structure could be the basis for a bio-sensor. ’One could take a sample and add a small number of liquid-crystal droplets to it,’ he says. ’Subsequent measurement of the optical properties of the liquid-crystal droplets would indicate if an endotoxin is present within the sample.’ However, Abbott is not yet sure whether such a bio-sensor would be able to differentiate among different pathogens.

’The most intriguing part of the development is in the mechanism by which the liquid crystal signals the presence of the toxin,’ says Oleg Lavrentovich, an expert in liquid crystals at Kent State University in Ohio, US. It has long been known that the interior ordering of liquid-crystal droplets is determined by the orientation of the surface molecules. But, he says, ’it turns out that the discovered sensitivity of the liquid crystal to endotoxin is rooted in an even more subtle effect... the sensorial response occurs in small isolated regions of the surface, rather than over the entire surface.’