Low acrylamide potato on the horizon 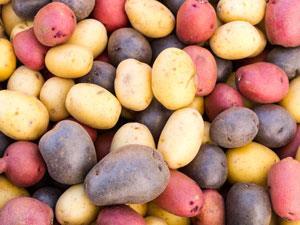 During cooking, different varieties of potatoes can produce widely varying levels of the carcinogen acrylamide

In response to European concerns over high levels of the carcinogen acrylamide in processed foods, researchers are looking to reduce dietary levels of the chemical by developing a new variety of potato. But research looking at why different varieties of potato produce widely varying levels of acrylamide during frying shows that it is going to be an uphill struggle.

Acrylamide is formed during high temperature cooking via the Maillard reaction. This reaction also produces the molecules which give fried and baked food its attractive colour and flavour. The chemical has been linked to an elevated risk of cancer in humans, so regulators are keen to limit the amount present in wheat, rye and potato products.

One approach is to develop potato varieties that are low in acrylamide precursors – the amino acid asparagine and reducing sugars. This is the goal of a large BBSRC-funded project; however, in potatoes, the link between the precursors and acrylamide levels are far from simple.

As part of efforts to discover which characteristics a low acrylamide-forming potato needs, researchers investigated the formation of the chemical in nine different potato varieties. Four of them are used to make crisps and five that are used for chips or French fries. The team, led by Nigel Halford from Rothamsted Research, UK, measured the levels of acrylamide precursors in each variety, along with the amount of acrylamide formed during frying. The precursor-acrylamide relationship was found to be variety dependent.

The study identified two crisp potato varieties – Lady Clare and Saturna – where acrylamide formation was consistently below the European commission's ideal of 1000ppb. Unfortunately, the complexity of the precursor–acrylamide relationship makes it very difficult to identify specific targets for breeding programmes.

‘We are also looking at the effects of different growing conditions and trying to understand the genetics and biochemistry of precursor metabolism,’ says Halford. ‘Our aim is to come up with the tools to produce low acrylamide varieties for 10–15 years in the future when there may be [harsher] regulatory limits.’

Lydia Smith from the National Institute of Agricultural Botany (NIAB) welcomed the research but warns the results of a one-year study should be treated with caution. ‘Potatoes are really sensitive to changes in conditions,’ she says, ‘and past studies have shown variation [in precursor concentration] across years can be almost as much as variation between varieties.’