US chemists have shown that a hugely porous chemical cage containing large numbers of exposed magnesium centres can efficiently and selectively capture carbon dioxide from a mixture of gases and subsequently release it using little energy.

The material, a metal organic framework or MOF, captures and releases CO2 more efficiently than any other system tested so far and, the researchers say, should be seriously considered as a potential candidate for the energy-efficient trapping of CO2 as part of carbon capture and storage strategies to decrease the volume of greenhouse gases entering the atmosphere.

Omar Yaghi and his team at the University of California in Los Angeles tested the CO2-filtering capacity of a compound called Mg-MOF-74, in which magnesium centres are joined by organic linkers to create a highly porous network. 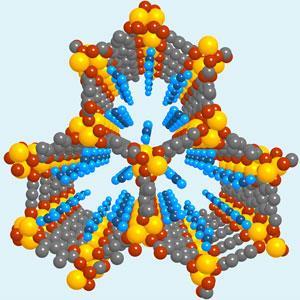 The team then directed a stream of gas consisting of 20 per cent CO2 and 80 per cent methane through the MOF. The material retained no methane and captured only the CO2, trapping an equivalent of 89g of the gas per kilogram of material before it became saturated, a figure more than twice the amount of any other MOF tested and more than zeolites, another class of material being investigated as a candidate for CO2 capture. It seems that the magnesium interacts weakly but selectively with the CO2, Yaghi says.

Significantly, the MOF spontaneously released nearly 90 per cent of the trapped CO2 at room temperature once the pressure of the gas flow was released, and surrendered the remaining trapped gas after heating to 80?C.

’Most people have been looking at trapping CO2 in porous materials in terms of equilibrium uptake,’ Yaghi says. ’In other words the material is exposed to CO2 until equilibrium is reached, which could take minutes to hours [or longer]. In our case we have what we call kinetic separation. You expose the material to an incoming wave of a mixture of gases and immediately you look at what is being held and what is being expelled. You do not have to wait until equilibrium is established.’

Ashleigh Fletcher, who researches carbon capture technologies at the University of Strathclyde in the UK, is encouraged by the findings, saying the results ’represent a big development in physical adsorbents for carbon capture and storage applications, with increased initial and regeneration capacities over zeolitic counterparts.’

However, Fletcher cautions that despite promising results in the lab, real-life applications of the discovery will need more development: ’As is often the case with such materials, there may be issues with scale of production for commercial purposes, and greater investigation into the role of competing species, for example water vapour, in the process stream would yield more practicable data for industrial applications.’