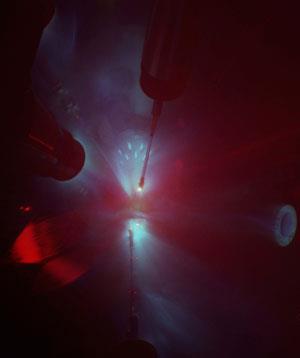 Photo of a laser-shock experiment in progress. For a brief second conditions similar to those of a planetary core are created

We take the Earth’s magnetic field for granted, but it is the only thing protecting us from the sun’s bombardment of lethal charged particles. Now, however, it seems there may be more planets outside our solar system with protective magnetic fields than previously thought. That’s the implication of a US study, which has demonstrated that the common planetary mineral magnesium oxide turns into a metallic liquid at high pressure.

Magnesium oxide is one of the simplest oxides present in terrestrial planets such as the Earth, as well as in the cores of giant planets such as Jupiter. Scientists are therefore keen to understand how its properties change under high temperatures and pressures. Theoretical predictions suggest that at very high pressures (0.3 to 0.7TPa) it should transform from a structure like sodium chloride, where each magnesium ion has six adjacent oxygen ions, to a structure like caesium chloride, where each magnesium ion has eight adjacent oxygen ions. Theory also predicts that at very high temperatures, typically greater than 5000K, magnesium oxide should turn into a liquid.

Unfortunately, current techniques have struggled to reach these pressures and temperatures. As a result, it has been impossible to map magnesium oxide’s actual phase changes. ‘Theorists have been publishing all these papers,’ says author Stewart McWilliams at Howard University in Washington, DC. ‘I think they’ve been desperate for some experiments!’

McWilliams’s group, which includes colleagues at the University of California at Berkeley and Lawrence Livermore National Laboratory, also in California, has managed to perform the necessary experiments using a shock-compression technique. The researchers blasted a small piece of magnesium oxide with high-powered lasers to generate pressures beyond 1.4TPa and temperatures of about 50,000 K. The blast sent a shockwave through the material, which the researchers monitored with a camera.

That picture may not be quite right though. A planet might not have a dynamo at its core, say McWilliams and colleagues, but it might have enough metallic magnesium oxide to perform the same function in its mantle – provided the temperature and pressure are high enough. Such conditions would probably be found inside ‘super-Earths’ – rocky planets with masses up to 15 times that of ours.

‘If you squeeze and heat hard and high enough, everything becomes metallic,’ says physicist Dario Alfè at University College London, UK. ‘The crucial point here is that magnesium oxide appears to become metallic at conditions not too far from those [at] the centre of terrestrial planets ... It makes super-Earths more likely to have magnetic fields, which [are] a protective shield from harmful solar (or stellar) radiation, and also make the retention of an atmosphere easier.’