A new dimension to actuation 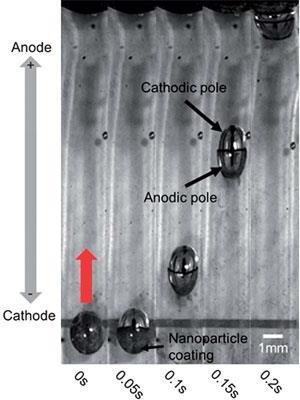 Researchers in Australia and Germany have made highly controllable actuators in the form of liquid metal marbles. The marbles have a nanoparticle coating that can be electrochemically manipulated to control their movement.

Actuation involves converting an input signal into motion to drive a mechanism or system. Micro- and nano-scale actuators are crucial components in consumer electronics, amongst other things.

Now, Shi-Yang Tang, under the supervision of Kourosh Kalantar-Zadeh and Arnan Mitchell, at RMIT University, Melbourne, has demonstrated that liquid metal marbles can act as actuators in aqueous media when an electrical current is applied. The marbles consist of a galinstan (an alloy of gallium, indium and tin) core that has been coated with tungsten oxide nanoparticles. An applied current causes the nanoparticles to migrate along the surface of the galinstan, creating an asymmetry in the surface tension that makes the marbles move.

This is in addition to other forces induced by deforming the metal droplet, providing the marbles with additional dimensions of control. The ability to dictate the speed and direction of the marbles means they could have potential uses in targeted drug delivery. 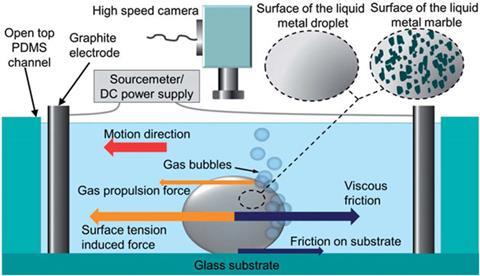 Michael Lyons, an expert in nanomaterials at Trinity College Dublin, Ireland, thinks the work is extremely interesting. ‘They’re using a very classical phenomenon – the effect of voltage on surface tension – to do new things and tying it up with nanoparticle technology.’ This, he says, will allow the motion of the droplet under any conditions to be predicted using simple physics.

However, Lyons also points out that the reversibility of the actuation must be explored if the marbles’ full potential is to be realised.

The team are now trying to control the dimensions of the marbles during synthesis. They are also looking at different nanoparticle coatings and exploring other input signals, such as light, to initiate actuation.