’Gas marbles’ surprise with their strength 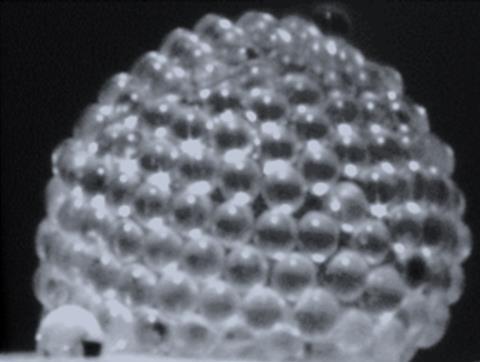 Extremely strong and stable bubbles have been created by trapping a small amount of gas in a liquid film surround by polymer microparticles.1 The researchers have dubbed the new bubbles ‘gas marbles’ and say that they could be used as tiny chemical reactors, to stabilise foams or to capture toxic gases.

Florence Rouyer and her colleagues at the University of Paris-Est in France found that their gas marbles were 10 times stronger than liquid marbles2 – a type of bubble composed of liquid droplets coated with water-repellent particles. An interesting property of liquid marbles is that they can move on solid surfaces without breaking apart so easily. Such materials have already been used to manipulate small quantities of liquids or as microreactors and water pollution sensors. Similar to their liquid relatives, the new gas marbles can roll on surfaces and withstand external forces, but while liquid marbles maintain their shape thanks to the properties of the liquid inside them, there is only air inside the gas marbles. ‘At first glance, [their strength] is surprising, but these materials contain two fluid–fluid interfaces, inner gas–water and water–outer gas, whereas liquid marbles contain only one, water–gas or oil–gas,’ says Bernard Binks, a physical chemist at the University of Hull, UK, 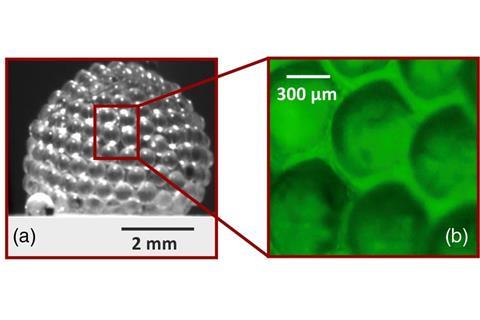 ‘Gas marbles were first generated by accident while we were studying particulate films,’ says co-author Yousra Timounay at the University of Syracuse in the US. The new material consists of a volume of air enclosed in a shell of polystyrene beads connected by an aqueous surfactant solution. ‘They are built by immersing and withdrawing a frame from a container filled with a soapy solution that is covered by particles at the liquid–air interface,’ Timounay adds. During the process, the particle film detaches from the frame and closes over itself to form a bubble.

To test the stability of the gas marbles, the researchers varied the pressure inside them by injecting or removing gas with a syringe until they burst or collapsed. ‘These experiments showed that the marbles can resist – without deforming – positive and negative relative inner pressures of amplitudes that are an order of magnitude larger than the stability threshold of soap bubbles or liquid marbles,’ Timounay says. This remarkable strength is due to cohesion between neighbouring particles induced by the liquid film between them.

Rouyer’s team believes that the new gas marbles could be used to trap and deliver unusual gases or to stabilise foams, but Binks says that more studies are required. He notes that the gas marbles’ stability under shear has not been investigated yet. ‘However, they may be of use as controlled release vehicles, say, of volatile perfumes from inner to outer gas phases upon application of a suitable trigger like temperature,’ Binks adds.