US scientists have found a way to control the direction of microscopic swimming robots using lasers. This is the first time that anyone has used a method like this to control a microscale particle in solution, they say.

Haw Yang at Princeton University and his colleagues used a polystyrene particle, with one half of its sphere coated in gold, as the swimmer. This type of particle is known as a Janus particle as it has two ‘faces’ that show different physical properties. The team used these properties to manipulate its direction. The Janus particle moves randomly in a liquid via Brownian motion, and when the particle is facing the right direction, the team uses a laser to give it a nudge forward.

The researchers found that the laser propels the Janus particle by heating up the gold half of the sphere, which propels it forward. The polystyrene half doesn’t react to the laser as the laser essentially passes through it. The team used short bursts of the laser, and if the particle went off target, they stopped nudging it until it came back round to the right position. 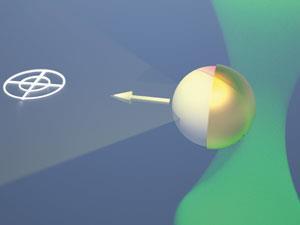 Bian Qian at Princeton University, who worked closely on the experiment, explains that ‘the most exciting thing for me is that we made the first successful attempt to use Brownian rotations for motion control’. Other researchers have used laser tweezers or magnets to try to manipulate direction, and others have used chemical concentration gradients or catalytically powered micromotors.

‘The significant advance here is the way that [the team] can only turn on the propulsive thrust when the device is orientated towards the target. Their photon nudging allows them to beneficially exploit the ubiquitous random rotations that all miniaturised devices experience when in a fluid environment,’ says Stephen Ebbens from the University of Sheffield, UK, who works on nanoswimming devices.

Yang says about their future plans: ‘The immediate goal of our current work is to scale down the control to the nanoscale in three dimensions.’ He explains that it is probably too early to talk about real-life applications. Raymond Kapral, an expert in nanomotors from the University of Toronto, Canada, agrees. ‘It is a nice idea and opens possibilities for new control scenarios. I believe that in the next several decades we will see many unexpected applications of a variety of motors performing tasks we can barely imagine now,’ he says.