Chinese and German scientists have designed a hybrid material that can be reversibly switched between being strong and rigid to soft and flexible by applying an electric charge. The researchers say it’s the first time anyone has been able to make such a material and could lead to more efficient manufacturing processes, as well as novel, self-healing materials.

Usually, structural materials are either strong or ductile, but never both. This means that engineers always have to make compromises when selecting materials. 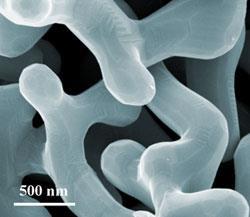 ’With our material you don’t have to compromise because you can use one property in one situation and then you can switch it when you need the other property,’ says J?rg Weissm?ller at Hamburg University of Technology, Germany, who created the new material with Hai-Jun Jin at the Chinese Academy of Sciences in Shenyang, China,

The material was made using a silver-gold alloy that underwent a corrosion process to remove the silver and form a gold structure containing a network of nanopores 10-20nm in size. This gave the gold a sponge-like structure, massively increasing its surface area.

By filling the structure with a perchloric acid (HClO4) electrolyte, an electrochemical double layer was formed between the liquid and metal. The team then applied an electrical charge to alter the absorption and desorption of oxygen on the gold’s surface. Standard mechanical tests revealed that the electric charge reversibly altered the material’s breaking strength and ductility by a factor of two. The reason why this happens is still not clear, however. ’No one had ever observed switching of a material’s strength and a factor of two is a very major change which we certainly did not expect,’ Weissm?ller says.

’This represents a hugely exciting development in material design since here we see an example of a material whose properties are not only controllable at the outset of the design process but which may be modified during the working life of the material,’ says Tim Richardson, a nanomaterials engineer at the University of Sheffield, UK. ’In this research the idea of "property-on-demand" is truly innovative.’

Weissm?ller explains that the next step is to improve the time taken for the material’s properties to change, which currently takes ’many seconds’, as well as investigating stronger materials that could be used in structural applications.