Medical probes get easy to spot

Scientists in the US have created nano-scale medical probes that are visible via both magnetic resonance imaging (MRI) and optical microscopy. They say that the probes, which contain gold nanorods and magnetic particles, can be easily tracked as they target cancerous tissue.

The last few years has seen a lot of research focused on medical probes that can simultaneously target, track and treat diseased parts of the human body. One tracking option is to base the probes on magnetic particles, which show up clearly in MRI scans. The magnetic fields of MRI penetrate deep into tissue, but the technique is not terribly precise. An option that provides more accuracy is to base the probes on luminescent particles such as gold, as the light emitted from these particles is visible to optical microscopy. However, optical microscopy also has a drawback in that it can only see things close to the surface of the body.

Joseph Irudayaraj and colleagues at Purdue University in Indiana, US, have for the first time created probes that draw on the benefits of both magnetic and luminescent particles. They use vapour deposition to grow gold nanorods, to which they attach amine (NH2) groups. Next they add magnetic iron-oxide particles capped with carboxylic acid (COOH) groups, which stick to the amines and form a structure that looks like a peal necklace. Finally they tag the probes with Herceptin, an antibody used to treat breast cancer. 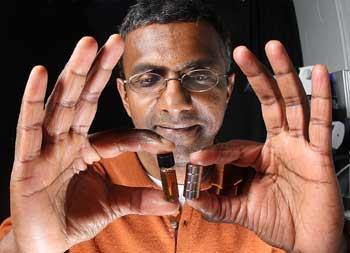 In tests in cultured cancer cells, Irudayaraj’s group found that MRI scans of their composite gold and iron-oxide probes produced a much higher contrast image than iron-oxide particles would on their own (a ’relaxivity’ of 248 mM-1s-1 compared with 64 mM-1s-1). They think this is because the way in which the iron-oxide particles are arranged around the gold nanorods boosts their combined magnetism. As expected, fluorescence images in the near-infrared were detailed enough to show the Herceptin-tagged probes latching onto the cells.

’This is a proof of concept study to test the probes,’ says Irudayaraj. ’Since the probe is new, the first experiment will have to be in cell cultures. There is still a lot that we need to understand. However, initial studies in cells show that our probes can target tumour cells. Applying this in bigger organisms will be the next step.’

’Multifunctional nanoparticles for combined imaging and therapy is a very important development,’ says Konstantin Sokolov, a biomedical engineer at the University of Texas in Austin who also studies nano probes. ’It can also benefit drug delivery, although [that] is not what authors are presenting in the paper as far as I can tell.’