Nasa’s Messenger spacecraft is bringing new understanding to the question of how Mercury formed. The new information looks set to rewrite theories about the birth of the solar system’s smallest planet.

Many scientists consider Mercury - with its high density composition, heavily cratered surface and magnetic field - to be the most unusual planet. It is the smallest of the other three rocky planets - Mars, Venus and Earth - yet it has a massive iron core and only a thin mantle. Scientists had thought these unusual features might have been remnants of a particularly violent formation.

In the mid 1970s, Nasa’s Mariner 10 probe made three flybys of Mercury, uncovering almost half of the surface. Yet it took over 30 years for scientists to get another close up look when, in 2008, Messenger made its first pass. Then, in March this year, the half-tonne, $446 million (?285 million) craft made its first orbit of Mercury - one of over 700 it is expected to make before its mission is completed next year. 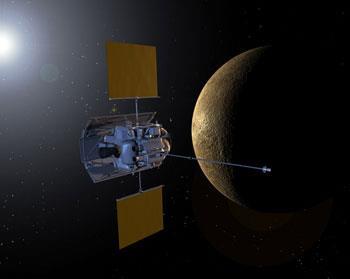 Messenger will orbit Mercury 700 times before its mission ends

Using Messenger’s gamma-ray spectrometer, Patrick Peplowski of John Hopkins University, US, and colleagues determined the ratios of radioactive elements on the planet’s surface.1 These elements emit gamma rays at specific, known energies, so by measuring the number of gamma rays at different energies, the researchers calculated the relative abundance of the elements.

Such moderate temperatures rule out several models of Mercury’s formation. These include the idea that Mercury once lost much of its mass in a collision with a similar-sized object, or that the sun gradually stripped the planet’s outer layers. Now, ’we are left with one theory - accretion of the planet from chondritic-like [meteorite] material,’ Peplowski says.

Another research group used x-ray fluorescence spectroscopy to probe the planet’s surface with the results backing up the theory that Mercury was assembled from meteorites or cometary particles.2 Larry Nitler, from the Carnegie Institution of Washington, US, and colleagues discovered that the ratios of a number of elements, such as magnesium and silicon, differ from those found in a common planetary and lunar mineral. The planet’s geology bears a closer resemblance to meteorites than its rocky neighbours. ’Theorists need to go back to the drawing board on Mercury’s formation,’ says Nittler. ’Most previous ideas about Mercury’s chemistry are inconsistent with what we have actually measured on the planet’s surface.’

Messenger has not just been taking measurements of Mercury’s surface. Thomas Zurbuchen of the University of Michigan in Ann Arbor, US, and colleagues employed the probe’s plasma spectrometer to detect heavy ions in Mercury’s ionised exosphere, the outmost region of the atmosphere.3 They found that sodium ions are most abundant, particularly around the poles where the solar wind - the continuous flow of charged particles from the sun - can funnel inwards. They also found contributions from helium ions, which probably originated in helium evaporating from the surface.

Peter Wurz, a planetary scientist at Bern University in Switzerland, who was not involved in these studies, thinks these results will help scientists to understand the physics of the magnetic fields surrounding planets, known as magnetospheres. Mercury’s magnetosphere is ’highly interesting’, he says, because it seems to be driven mostly by the solar wind and, unlike Earth, has an almost non-existent ionised layer, or ionosphere, to dampen it.