Metal-free resins can drive down cost of solar energy 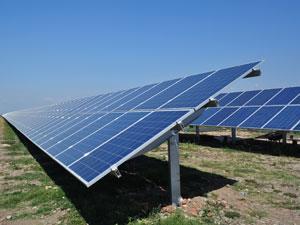 The earth receives 20000 times more energy from the sun than our current global energy use.

Costly metals in some solar cells could be replaced by cheap resins, according to Korean research.

Dye-sensitised solar cells (DSSCs) are an important class of solar cells, which demonstrate a number of important attributes, such as low cost, flexibility and good efficiency. It is perhaps the most actively researched solar cell technology. However, it is still hindered by expensive components.

Currently, a third of the cost of DSSCs could go towards the noble metal-based dyes used to sensitise the titania photocatalyst, allowing it to harvest the more useful visible part of the spectrum. However, Wonyong Choi and his group at Pohang University of Science and Technology have replaced these dyes with a simple and cheap phenolic resin.

Choi had previously demonstrated that phenol, when attached to titania, showed the necessary ligand-to-metal charge transfer (LMCT) property under visible light. However, there were problems that prevented its use.

‘Phenol alone forms a very weak LMCT complex on TiO2 and its surface complex is not stable,’ he explains. ‘By polymerising phenols into a resin form, the LMCT complex is stronger and absorbs more visible light.’

The researchers were able to attach the resin onto TiO2 by simply dispersing the resin and TiO2 powder in acetone solvent. The resultant material demonstrated visible light hydrogen production and dye degradation, two other possible applications.

Erwin Reisner, a photocatalyst expert at the University of Cambridge, UK, praises the novelty but also the no-nonsense nature of the catalyst. ‘It’s straightforward, works for relevant conditions and seems to be quite inexpensive,’ he says. He also urged the researchers to fully test the material in a solar cell device to establish the impact it may have.