Scientists have long speculated that life’s preference for left-handed amino acids may have been triggered by compounds brought to Earth by meteorites. Now they’ve shown exactly how two crucial steps in this process could happen.

Carbonaceous chondrites, a relatively rare type of meteorite, are rich in carbon compounds including amino acids. One set of meteorite fragments, which fell on Murchison in Victoria, Australia, in 1969, contains more than 70 different amino acids. In 1997, Sandra Pizzarello of Arizona State University found that there was a small excess of the left-handed form, or enantiomer, of four amino acids in Murchison samples.

Since then, scientists have been trying to prove how this handedness, or chirality, could have been transferred to all the other amino acids and sugars in biology; and how that small excess could have been amplified into a total preference for one enantiomer over another.

Ronald Breslow of Columbia University, New York, and colleagues now claim to have convincing answers to both questions. ’I think we’ve come up with a credible story about how it happened,’ says Breslow. He presented his work at the American Chemical Society meeting in New Orleans, US, on 6 April. 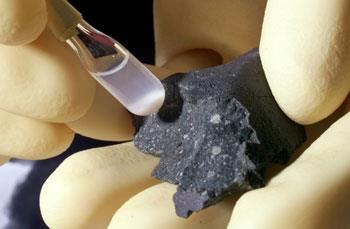 Fragment of the Murchison meteorite, along with a test tube of particles isolated from the rock

The team studied how several amino acids - including alpha-methyl valine, alpha-ethyl alanine and alpha-methyl isoleucine - behaved when mixed with a primordial brew of other organic compounds and copper sulfate. The structure of these alpha-substituted amino acids means that they are unable to racemise, locking in their chirality.

They found that the chiral amino acids reacted with ketoacids to form imines, which then lose carbon dioxide and fall apart to generate a new amino acid. Crucially, these new amino acids took on the handedness of the original chiral amino acids. Breslow says this is the first time that this kind of chirality transfer has been shown to be possible in plausible prebiotic conditions.

Copper ions, a common constituent of meteorites, seem to play a critical role in shepherding the imine intermediate so that it adopts the correct handedness, says Breslow. And although ketoacids have not been found in meteorites, hydroxyacids and iron oxides - both present in meteorite samples - react readily together to form ketoacids, he adds.

This procedure has also been developed by Donna Blackmond’s group at Imperial College, London [1, 2], and Yujiro Hayashi at the Tokyo University of Science, and colleagues, in Japan [3]. But Breslow points out that his team have also shown that pouring water through the mixture - mimicking rain falling into a pool - can enhance the amplification even further.

The amino acids present in the Murchison samples may have originally formed from reactions between ketones, ammonia and hydrogen cyanide - the kinds of simple compound that have already been found in protoplanetary disks circling young stars.

Scientists have speculated that right-handed forms of amino acids in the meteorites could then be preferentially destroyed by circularly polarised light, generated by particles accelerated around neutron stars.

Both processes have previously been replicated in the laboratory, although astronomers are still looking for more convincing evidence of this in the heavens.

And some scientists are still not convinced that the Murchison samples were not contaminated after arriving on Earth. However, Breslow points out that their amino acids are rich in heavy isotopes of hydrogen, carbon and oxygen, typical of non-terrestrial material. ’That signature guarantees you’re not talking about an Earth origin for the amino acids,’ Breslow told Chemistry World.

What’s more, Pizzarello reported in February that a meteorite recovered from the pristine conditions of Antarctica also held a similar excess of left-handed amino acids [4].

Breslow’s team is now trying to achieve the same chirality transfer and amplification effects using the nucleosides that make up RNA - thought by some scientists to be the first molecule on Earth to carry the information needed to make life.