Methamphetamine crooks down on the farm 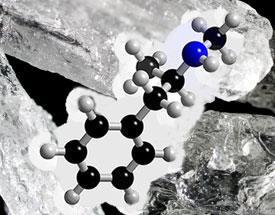 Iowa researchers have discovered a way to curb illegal methamphetamine production across agricultural states in the US. The plan is to add a chemical to farmers’ fertiliser, which is often stolen to help cook up the drug, Iowa officials have announced. But it’s not clear whether this will severely dent the methamphetamine trade.

George Kraus and John Verkade of Iowa State University led a six-year program to stop people making the highly addictive drug in small-scale labs at home. So-called ’meth cooks’ flourish in Iowa because they can steal a crucial ingredient, anhydrous ammonia, from the 26,000 tanks across the state where it is stored for use as fertiliser.

Nearly all Iowa meth cooks follow the same recipe, says Marvin Van Haaften, director of the governor’s office of drug control policy. They convert an over-the-counter decongestant, pseudoephedrine, to methamphetamine by reaction with lithium strips (from batteries) and anhydrous ammonia. Despite attempts to regulate the sale of pseudoephedrine, and to lock up ammonia tanks, meth cooks are still producing the drug.

The chemists found, however, that doping the anhydrous ammonia with calcium nitrate, itself a fertiliser, dramatically reduced the meth yield from around 40 per cent to under two per cent. Stealing adulterated ammonia from the fertiliser tanks would no longer be worth the effort. The findings have been confirmed by the US Drug Enforcement Administration, and the idea successfully tested in field trials where unlocked doctored ammonia tanks were soon left alone by would-be meth makers.

In practice, farmers will add the meth inhibitor to their tanks voluntarily and up to twice a year: the cost per tank is estimated at $24, cheaper than a $44 lock. The chemical additive will not stop illegal meth trading: at least 80 per cent of methamphetamine in Iowa comes from Mexico, estimates Van Haaften. But it will ease the concerns of farmers and local communities, he added.