Natural processes, not human activity, are responsible for the release of sequestered arsenic that kills thousands of people every year in Bangladesh 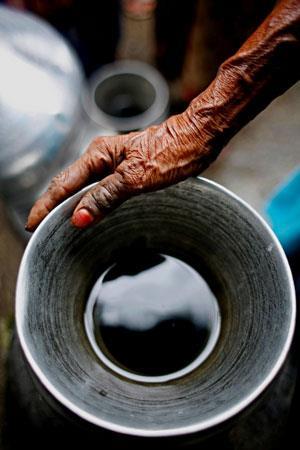 New work examining arsenic contamination of groundwater in Bangladesh could help people work out where to sink wells to provide safe drinking water. By tracing how arsenic gets into drinking water the scientists concluded that natural processes were too blame, rather than human disturbance of groundwater.

Contamination of groundwater by naturally occurring arsenic salts has been an insidious environmental problem affecting millions of people across the Indian sub-continent for decades. The issue was first brought to the attention of the scientific community in the 1980s and to public attention as late as the 1990s.

There are numerous explanations for why previously insoluble salts should be solubilised and released into the water where they cause chronic poisoning and trigger many cancers. The iron reduction hypothesis is currently favoured. When iron oxides are present the arsenic remains adsorbed to the iron but reduction removes this sorbent enabling mobilisation. There is an apparent link between reductive dissolution of these iron oxides coupled to microbial respiration of organic carbon compounds in the groundwater. But the source of the organic carbon – whether it is simply present in sediments or whether it has an anthropogenic origin – has been hotly debated.

Brian Mailloux at Barnard College, in New York, US, and colleagues have investigated the carbon-14 signature of microbial DNA isolated from groundwater samples in order to reveal the importance of surface and sediment-derived organic carbon. Their findings show a gap of several years in the carbon-14 trace between samples from deep aquifers, whereas the samples from shallow water sources are much younger. What this means is that rather than being driven by modern anthropogenic carbon sources, the solubilisation of arsenic in the deep aquifers used for village, tubewells, is a much older, natural process.

This knowledge should help planners make rational decisions on sourcing drinking water based on whether or not there is a flow of organic carbon into the deep aquifers. If there is not, then such sites should be safer as the mechanism for arsenic solubilisation will not be active. Nevertheless, the findings also caution against sourcing water where anthropogenic carbon might trigger the release of soluble arsenic into shallower water.

Geomicrobiologist Jonathan Lloyd of the University of Manchester, UK, explains that there is a consensus view that anaerobic metal-reducing bacteria play a significant role in arsenic mobilisation. ‘An advantage of the present approach, which targets purified DNA, is that advanced environmental genomics techniques can also be used to characterise the microbial communities in some detail, suggesting for example the sort of biogeochemical processes.’ He adds: ‘It will be interesting to see if the technique can be adapted to look at the microbes attached to the sediments, which are most likely intimately involved in arsenic mobilisation.’