Microwave reactions in silicon carbide vials - which are heated by microwaves but shield the contents from radiation - have confirmed that most of the benefits seen in microwave-assisted chemistry are purely due to heating, Austrian chemists say.1

Oliver Kappe and his group, from the University of Graz, used custom-made sintered silicon carbide (SiC) reaction vessels to separate the heating effects of microwave radiation from so-called ’non-thermal’ or ’specific’ microwave effects, whereby enhancements in reaction rate, yield or selectivity are attributed to some direct interaction of the reaction mixture with the microwave radiation.

Silicon carbide is ideal for this purpose because it completely absorbs microwave radiation, heating up in the process. Kappe explains that it is also exceptional at transferring heat to the contents of the vial, while at the same time completely shielding them from the microwaves. The rapid, controlled heating typical of microwave chemistry can therefore be accurately reproduced, but without any radiation entering the vial. 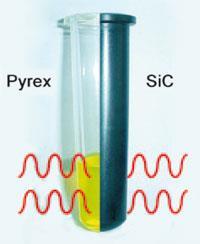 The team screened 18 reactions for which some kind of microwave enhancement had been reported when compared to conventional heating techniques. Kappe’s team ran each reaction in standard glass vials and their SiC vials - and in all cases got almost identical results. But Kappe is quick to emphasise that these initial cases are quite simple reactions where they had not really expected to see very big differences. ’This paper is more of a proof of concept for the silicon carbide vials,’ he says. ’We are now working on more challenging chemistry, where in fact we do see differences - but only in a few, very specific cases.’

However, De la Hoz points out that there are other possible mechanisms for interaction of microwave radiation with molecules: ’Carbon nanotubes are non-polar, but they are heated to more than 2000?C in a few seconds [by microwaves]. There have also been reports of radical reactions without the need for radical initiators - in these cases it might be possible to have non-thermal effects.’ Kappe agrees, saying that the team plans to explore nanoparticle synthesis: ’There are several papers that claim specific interactions of the electric field with precursors in the synthesis, and we can exclude that.’

Kappe is excited about the SiC reactors opening up new reactions for microwave chemists. He explains that the vial’s ability to transfer heat to the reaction means they can now use non-polar solvents such as toluene or hexane which normally can’t be heated in microwaves, as well as strongly corrosive bases like hydroxide and reagents that give off HF [hydrofluoric acid] that would normally attack glass. ’We can also look at higher temperatures,’ says Kappe, ’the melting point of this material is 2700?C, and we’ve already taken it up to 600?C.’ Although he adds that at these temperatures they need to be careful not to melt their microwave reactor.

The extreme capacity of SiC to transfer heat also works to make microwave reactions safer and more controllable, since excess heat from sudden exotherms can be safely transmitted to the surroundings to avoid overheating. ’We also want to try synthetic organic transformations involving bare metals, such as Grignard reactions, says Kappe. ’Everyone knows not to put metal in kitchen microwaves - we’ve seen sparks from direct interactions of the field with the metal. We know we can avoid these with silicon carbide, so we can put the metal back in the microwave!’