India’s plan of action to fight climate change by focusing on renewable energy sources - rather than cutting carbon emissions - has evoked mixed feelings in the scientific community. 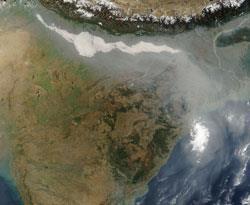 The plan was prepared by a panel headed by prime minister Manmohan Singh. He told G8 leaders in Japan that India ’cannot for the present even consider quantitative restrictions on carbon emissions’ because this would stunt economic growth. Singh assured the leaders that India’s per-capita emissions would never surpass those of the developed countries.

Instead of emissions cuts, the action plan focuses on energy saving, renewable energy, and ’adapting’ to climate change. For instance the country’s agriculture sector will be made resilient to flooding and extremes of weather by developing new crop varieties.

The action plan’s push for non-fossil energy sources, especially solar energy, has pleased those like K S Narayanan, at the Jawaharlal Nehru Centre for Advanced Scientific Research in Bangalore, whose team is developing ’combo sandwich solar cells’ using three different polymers. ’There is a big role for chemists because in the end [solar energy conversion] is a chemical problem,’ says Gautam Desiraju, a chemistry professor at the University of Hyderabad. The action plan aims to increase photovoltaic production to 1 gigawatt per year. Four companies in the photovoltaic business have already received approval to set up in ’Fab City’, a proposed semiconductor-making hub outside Hyderabad.

But Ramesh P Singh, from the Center for Earth Observing and Space Research at George Mason University in Virginia, US, believes that the government’s decision not to cut emissions may be short sighted because, global warming aside, the pollution accompanying CO2 emissions will harm India.

A recent study by Singh has shown that coal-powered plants are responsible for the increase in soot (also known as brown haze) which hangs over the Gangetic plains - home to 600 million Indians. ’Besides creating health problems, this haze may weaken the monsoon by blocking sunlight reaching the Indian Ocean,’ he told Chemistry World  . The decreased sunlight may also affect India’s solar energy programme, he says.

Singh says that India must balance emissions and growth by adopting a carbon capture and sequestering (CCS) strategy. But Climate Challenge India (CCI), a coalition of environmental experts, financiers, analysts and activists, said that the plan fails to chalk out ’a discernible low-carbon pathway for India’.