Using magnets to trigger drug release in the body

German scientists have encapsulated nanomagnets inside metal organic frameworks (MOFs). The MOF magnets can be filled with a drug, which is released when a magnetic field is applied.

The group then loaded their MOF with ibuprofen and found that they were able to trigger and control its release by simply applying an external magnetic field. The magnetic field heats the magnets in the MOF, which causes the load to burst from the framework. 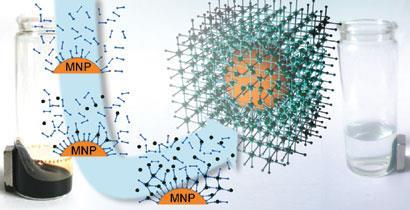 MOFs in which the frameworks themselves are magnetic have been made before, but they are not easy to manipulate. Kaskel’s embedded MOF magnets, however, can easily be manipulated from the outside. Magnetic fields can penetrate human skin, and magnetic triggers that could be used to release the drugs are already available on the market. However, before the MOF magnets can be used in the human body, toxicity tests will need to be done.

’An enhanced sustainability of industrial and medical processes is crucial for our future,’ says Lohe. ’Magnetically functionalised MOFs could be a small building block on this path.’

’The particles will certainly increase the possibility of using nanoMOFs for drug delivery applications in the near future,’ agrees Christian Serre, an expert in porous solids from the University of Versailles  in France, ’and they’ll add a new tool to the emerging domain of MOFs in biomedicine.’