Molecular dance set to makes waves across the pond

A radical fusion of quantum molecular dynamics, digital art and electronic music developed at the University of Bristol, UK, is set to go transatlantic. Danceroom Spectroscopy (dS), developed by Milwaukee-born theoretical chemist David Glowacki, has wowed scientists, artists and the general public across the UK. And he is now gearing up to present his work at the South by Southwest interactive festival in Austin, Texas later this month.

dS allows people and simulated atomic particles to interact, both visually and in the form of sound (see video below). Glowacki has developed an interactive computer model of how particles move and interact with each other, using a Feynman-Hibbs molecular dynamics simulation inspired by his and his colleagues’ ongoing research. He then uses three-dimensional imaging to create real-time maps of people’s movement, which he combines - to novel yet awe-inspiring effect - with the particles in the model.

’This is the really new idea,’ he tells Chemistry World. ’The software model treats people’s motion as an external forcefield perturbation that interacts with the field of each individual particle, in addition to the existing interactions between the particles themselves.’ This means that the particles ’feel’ people’s motion, allowing audiences to interact with the particles in real time as they are projected onto a video screen.

Furthermore, by deconvoluting the apparently chaotic behaviour of the interactive particle ensemble into a spectrum of characteristic vibrational frequencies and mapping the spectral peaks to musical scales, the software can represent the ’sound’ of these interactions. This is accomplished using a Fourier transform in a similar fashion to what is done in more traditional types of spectroscopy. 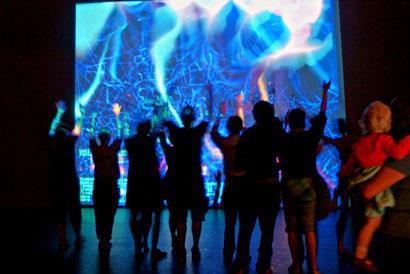 ’It renders quantum mechanics onto a screen in a way that people can relate to,’ says creative technologist Tim Kindberg, director of applications developer matter2media, who is familiar with the project. ’It causes the audience to ask about what the particles are and quickly gets into questions about what quantum mechanics is.’

By transforming human movement into energy waves that warp quantum forcefields, dS generates real-time soundscapes and visual landscapes that bring science and art together. ’It exists in a weird frontier land,’ says Glowacki, ’where it’s not a science exhibition per se, but neither is it typically what’s imagined as an art installation.’

Either way, danceroom Spectroscopy is certainly drawing in the crowds. Glowacki and his ’crew’ have appeared at TEDx and the Shambala festival in the UK as well as the SONAR arts and music festival in Barcelona. And in addition to its forthcoming appearance at South by Southwest, dS will also form the centrepiece of a series of music and dance workshops at Bristol’s Arnolfini, following a successful run last summer. It is even set to be part of the London 2012 cultural Olympiad.

Wider applications
This show is about more than just music. Kindberg thinks that it offers the potential for much broader applications, such as facilitating crowd-computer interactions or even using the real time movement of crowds as a direct input into computer systems. It also promises to be a valuable tool in understanding perturbation and feedback loops in non-equilibrium systems.

dS is helping to change the way that people interact with technology, too. Nearly all modern gaming and social networking sites centre on the computer as the hub for interaction, says Glowacki. dS is different in that it is deployed in a way that encourages a significant degree of lateral human interaction among much larger groups than those targeted by traditional video games, with the technology simply acting as a creative vehicle for this interaction. These sorts of socialising uses of technology are going to be crucial, he explains, as people band together to address issues like energy, environment and     climate change.

David Glowacki and some of his collaborators will appear at the South by Southwest festival in Austin, Texas on March 13th. Danceroom Spectroscopy workshops will take place at the Arnolfini in Bristol on 17-18 March and 28-29 April. See links below: