A mobile phone-based sensor can be used in measure nitric oxide in breath, a indicator for airway inflammation

In the future, asthmatic children may be able to monitor their condition using breath analysing sensors built into their mobile phones. Thanks to a UK company who have embedded a carbon nanotube sensor, which can monitor nitric oxide (NO) levels in exhaled breath, into mobiles.

’200 different chemicals are exhaled in your breath,’ says Victor Higgs, managing director of Applied Nanodetectors, during a demonstration of his company’s latest prototype at the Nano and emerging technologies forum 09 in London this week. And these can be used to monitor and diagnose a wide range of diseases. 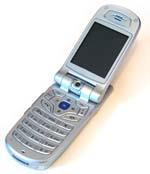 ’We focused on asthmatics first, because the NO measuring process is already FDA [US Food and drug administration] medically approved,’ he told Chemistry World. Exhaled nitric oxide has been used as a biomarker for monitoring asthma since 1995, because inflammation in the airways causes elevated levels of NO in breath.

The mobile phone prototype looks like a normal phone except for an additional small round hole in the top right hand corner - that is indistinguishable from a speaker. Air breathed into this hole flows down a tube to a carbon nanotube and silicon-based sensor that Higgs declined to give any more information on for proprietary reasons. After five seconds the phone displays both the amount of nitric oxide in the user’s breath in parts per billion and a traffic light warning icon indicating if the concentration is normal (green), slightly elevated (amber) or high (red).

Higgs explains that the end goal is for the data to be simultaneously transmitted to a healthcare server, automatically updating the patient’s medical records (the software for this part is already in place, and also on display this week). The server will then send the data to a doctor for analysis, and if concerned they would feedback to the patient using text or e-mail.

The idea of having a handheld, portable breath monitoring device has been proposed before, but this is the first mobile phone based device. ’We are the world first,’ says Higgs. Compliance is a major problem in any type of monitoring system, the majority of asthma suffers are children and most carry phones all of the time, so this led to the idea of combining the two, he explains.

’The objective of the diagnostic tool is that you monitor every day, because it is monitoring direct inflammation of the airways. So before you even have the symptoms you know you have to change your medication,’ he says. Asthma is currently not monitored and here lies one of the company’s major hurdles: ’One of the challenges here is a cultural thing, getting people used to monitoring.’ And it isn’t just the patients that need to change, but also health service as the infrastructure for an integrated electronic healthcare system does not exist in the UK. It is putting this in place that means that Higgs is not able to predict how long it will take for this device to reach the market place.