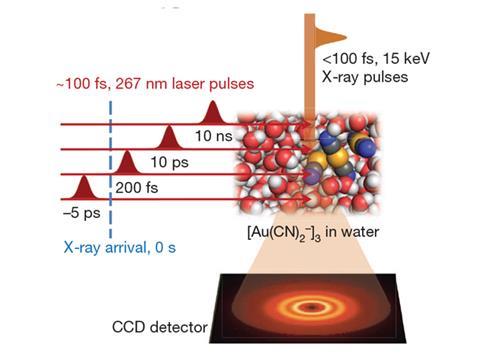 Last week we reported that a team of researchers in the US had directly measured a bond transition state in the oxidation of carbon monoxide, using x-ray pulses fired over femtosecond timescales to examine carbon monoxide molecules reacting with oxygen atoms on a ruthenium catalyst.

Now, a separate group based in South Korea and Japan have also directly observed the formation of chemical bonds using a femtosecond x-ray laser. The group used similar techniques to study the formation a gold trimer complex ([Au(CN)2-]3) from dissolving Au(CN)2- in water. Upon scattering an x-ray pulse off the specimen, the team were able to establish that the Au–Au covalent bond that forms to produce [Au(CN)2-]3 evolves from a weakly bound state to a tight linear arrangement.

Both sets of researchers believe that analysing chemical bonds on such small timescales will provide scientists with a tool to study the dynamics of complex chemical and biological systems.