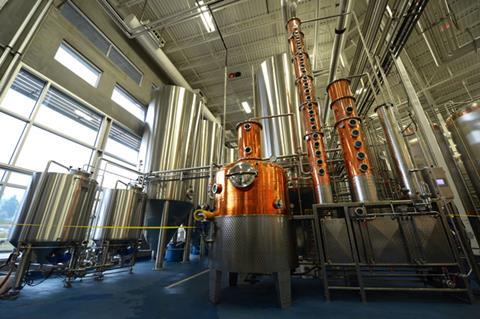 Distillation of alcohol is extremely energy intensive. The new nanoparticle-mediated process is much more efficient

Researchers in the US have demonstrated a remarkably efficient new way to distil alcohol from water – using light. The method needs less energy than conventional thermal distillation and produces a more concentrated distillate. While the new method is unlikely to displace conventional distillation in industry, the researchers say, it could find niche applications in separation and purification processes.

Naomi Halas and co-workers at Rice University in Houston laced a mixture of water and ethanol with gold–silica nanoparticles and shone laser light on the suspension from above. When light hits a nanoparticle it both absorbs photons, becoming warmer, and scatters photons, which can be picked up by its neighbours, increasing their temperature. In this way light energy becomes trapped close to the surface, causing local heating and driving off the more volatile of the two components – in this case ethanol.

‘We are still applying heat, only in a different way,’ says Halas. ‘For the last 10,000 years we have been boiling water the wrong way – from the bottom. Here we are heating it from the top, which is much more energy efficient as we do not have to heat the entire volume of the liquid.’

Intriguingly the optical distillation of ethanol avoids a classic problem encountered in conventional distillation – the eventual formation of an azeotropic mixture, which limits the maximum concentration of alcohol to around 95%. ‘With our system we can achieve 99% very easily,’ says Halas. It seems likely that the highly localised heating on the surface of nanoparticles somehow disrupts hydrogen bonding within the ethanol–water mixture, allowing greater separation of ethanol from water molecules at higher concentrations of ethanol. When the experiment was repeated using propanol – a larger alcohol with less hydrogen bonding in the mixture – optical distillation produced the same result as thermal distillation.

‘We have shown that this type of system allows us to separate liquids in new ways and can result in distillation properties that are distinct from thermal distillation in some cases but similar in others,’ Halas says. ‘While I think it is unlikely that this will replace conventional distillation, which is a very mature technology, it could find niche applications for new and different separation methods.’

Commenting on the work, Martin Moskovits, a nanotechnology expert at the University of California, Santa Barbara, says: ‘Any observation that sets a well-known process like distillation on its ear is undoubtedly something we need to investigate and understand deeply. It may well force us to rethink other nostrums among even our most thoroughly understood phenomena. All in all this has the hallmarks of an important discovery.’

And could light be used to distil hooch? ‘We’ve joked about this in the lab,’ says Halas. ‘But rather than moonshine it would of course have to be called sunshine!’