Nanoparticles give cancer drug a boost

Efficiency of Taxol improved by encapsulating it in a polymer nanoparticle

US scientists have taken a novel step towards fighting the reoccurrence of lung cancer, using drug delivering nanoparticles. Their leak-free polymer nanoparticles, which have been tested in vivo, only open and deliver their cargo once inside the acidic environment of a cell.

The multidisciplinary team led by Mark Grinstaff of Boston University and Yolonda Colson of Brigham and Women’s Hospital, also in Boston, have designed nanoparticles to carry the anti-cancer drug paclitaxel (Taxol) and tested their efficiency on mice. The nanoparticles switch behaviour from hydrophobic to hydrophilic upon entering a cell, triggering the release of the drug. 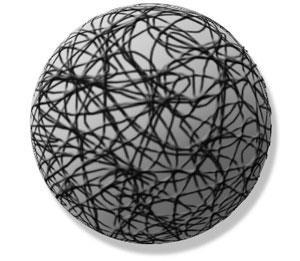 The nanoparticles swell (above) in an acidic environment, triggering the release of the drug they are carrying

’What is unique about these particles, and differentiates them from other types of nanoparticles,’ explains Grinstaff, ’is that when they enter a mildly acidic environment - pH 4 that you find in the endosome - they swell and that swelling results in water entering the system and the drug being released.’ The nanoparticles swell from 100 nanometres to more like 1000 nanometres and the final particle is a very loose structure that is more like a hydrogel-type polymer structure, he adds.

’Another thing that is unique about these is that the drug really does release only in response to the pH change,’ he adds. ’Most drug delivery systems are very leaky.’

Kenneth Suslick, University of Illinois at Urbana-Champaign, US, an expert in nanoparticles, says that ’this is a particularly exciting application. The use of a pH controlled swelling of a polymeric material to release a drug is a very clever innovation. As far as I know, for drug delivery, this is the first of its kind.’

Moving into the body

Lung cancer kills 1.3 million people worldwide annually. After a tumour has been surgically removed, there is a 30 per cent chance that the cancer will return within five years, says Grinstaff, because of the residual cancer cells left in the area from which the tumour was removed. Grinstaff envisages that the nanoparticles will be applied to this problem area, on the operating table, immediately after the tumour has been removed.

’Grinstaff has chosen a particularly important drug application,’ says Suslicks. ’Currently Taxol is administered over 24 hours using a slow intravenous drip, as it is exceedingly water insoluble and has to be administered in a solution that the body can tolerate. And because of its insolubility that ends up being a large volume. Being able to encapsulate the drug and then release it in situ is a particularly desirable goal.’

Having proved its viability as a drug carrier, Grinstaff says that the ’major goals for 2009 are to carryout a full toxicology screen on the polymer and then a large animal safety study.’