Colour images that can be programmed to last from seconds to hours could be used for top-secret documents, say researchers

Materials displaying ’self-erasing’ colour images have been created by chemists in the US, who have studied how certain nanoparticles can assemble and disassemble themselves under different wavelengths of light.

The materials, which are printed with ultraviolet (UV) light and erased with visible light, could one day be used for self-expiring bus tickets or for carrying secret messages.

’Self-erasing papers are important for time-sensitive materials and secure communications,’ said study leader Bartosz Grzybowski of Northwestern University in Evanston, Illinois. ’On the fundamental level, what we describe is also a very different way of looking at the concept of information storage. We’re not using traditional coloured inks per se, but rather we "generate" or "elicit" colours only when particles in the film self-assemble.’ 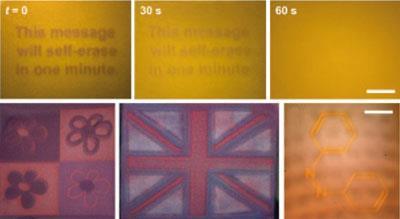 Top: The text in the films fades and is erased within 60 seconds by exposure to intense visible light. Bottom: Different colours are generated depending on how long each area is exposed to UV light.

Grzybowski’s group makes the materials by coating gold and silver nanoparticles with a single layer of azobenzene molecules, and then embedding the nanoparticles in thin, flexible ’organogel’ films. When the films are exposed to UV light, the structural symmetry of the azobenzene molecules flips, and they acquire electric dipoles that make them attract. This attraction causes the nanoparticles to assemble, and thereby take on a new colour. However, in an absence of UV light - or even better, in strong visible light - the particles revert to their original symmetry, and the colour disappears over a period of time.

The exact colour of the exposed films depends on the amount of UV exposure they receive: the gold nanoparticles evolve from red to blue, while the silver nanoparticles evolve from yellow to violet. Moreover, by altering the surface coverage of the azobenzene molecules, the printing and erasing times can change from seconds to hours, and in this way the films can be programmed for different purposes.

When exposed to UV light, the trans-azobenzene groups coating the nanoparticles isomerize to cis-azobenzene with a large dipole moment

Grzybowski told Chemistry World that he envisages applications from bus tickets that expire after a certain journey time to top-secret documents that are safe from prying eyes. ’Imagine Pentagon reports that after a meeting of their top brass would self-erase; there’s no way to take the copy to the press,’ he said. ’Better still, since these materials very rapidly self-erase when exposed to visible light, you cannot Xerox them.’

In fact, the Xerox printing corporation developed a type of self-erasing paper in 2006. It worked using a phenomenon known as photochromism, in which the ink itself changes structure and darkens upon exposure to a certain wavelength of light. The paper’s image would last for 16-24 hours, but unlike the Northwestern group’s films this time could not be programmed, and there was no option for colour.