Researchers in the US have created a DNA-based nanorobot that can work its way through cell cultures, delivering cargo only at specific targets. The development could pave the way for programmable therapeutics, in which nanorobots would provide medical treatment only to certain types of cell or tissue. 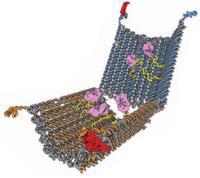 The field of nanomachines has taken off in recent years, mostly thanks to so-called DNA origami. In this technique, DNA strands can be folded controllably into a structure, onto which different molecules can be attached. Researchers have already shown that structures built using DNA origami can perform basic robotic tasks, such as sensing, computation and targeting cells. But, says biophysicist Shawn Douglas at Harvard Medical School in Boston, Massachusetts, no one has ever combined these tasks to do something more sophisticated, such as cell-targeted cargo delivery.

Douglas, together with his colleagues, has now done this with a hexagonal, barrel-shaped DNA robot. The robot is just 35nm across and 45nm long, and is hinged at the base to clasp and unclasp in a clam-like manner. At the top, the barrel has ’locks’ made of short DNA molecules that unlock when they bind with antigen ’keys’, releasing the barrel’s cargo, such as antibodies.

In the researchers’ experiment, billions of nanorobots were released into mixed cell cultures. The nanorobots diffused around, coming into contact with different types of cell. To cells without the appropriate surface key - that is, the right antigen combination - the nanorobots did nothing. However, when a nanorobot came across a cell with the correct antigen combination, its locks opened and the cargo was released - in some instances, killing the cell.

’It is impressive, and I am amazed it worked so nicely and cleanly,’ says Milan Stojanovic, who researches autonomous therapeutic devices at Columbia University in New York, US. ’It’s surely an important contribution and crucial step in the right direction.’

Ehud Shapiro, an expert in the crossover between computer science and molecular biology at the Weizmann Institute of Science in Israel, is also impressed. ’This pioneering and elegant work brings us closer to realising the vision of programmable drugs based on autonomous, programmable devices,’ he says.

Douglas says his group is seeing whether they can achieve similar results in mice but he thinks the nanorobots may not be restricted to programmable therapeutics. They could be used for ’diagnostic and even non-medical applications ... anywhere that electronic devices would be too large,’ he says.