Carbon nanotubes can make a rubber like material that remains usable in a temperature range of over one thousand degrees.

Researchers at the National Institute of Advanced Industrial Science and Technology in Tsukuba, Japan used chemical vapour deposition to build a random network of carbon nanotubes. The resulting material was viscoelastic - it had a thick liquid consistency like honey while also exhibiting the recoverable stretchiness of elastic.

While silicone rubber has an operational temperature range of around -50?C to 200?C, outside of which it breaks down or hardens solid, the carbon nanotube material is viscoelastic from -196?C to 1000?C, maintaining its properties across a much larger temperature range. 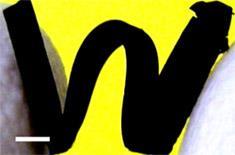 The discovery was almost an almost accidental extension from the team’s previous worked modifying the properties of carbon nanotube forests, explains Ming Xu, one of the researchers involved in the work.

’By modifying the catalysts, we found we could control the alignment [of the nanotubes] from quite good to quite random. Therefore, having fabricated this random network of carbon nanotubes, we investigated what its properties were, and as a result we found that the viscoelastic properties were improved from an aligned forest,’ says Xu. It was only after they began investigating the advantages of their new material compared with rubber that they realised that the material retained its properties over such a large temperature range.

The behaviour of this new material makes sense to Yury Gogotsi, director of the A. J. Drexel Nanotechnology Institute in Philadelphia, US when considered in context of graphitic materials. ’This work is interesting,’ he explains ’but graphite experiences very small changes in mechanical properties over a very wide temperature range.’

However, there has been very little work done on the viscoelastic properties of carbon nanotubes to date, which Gogotsi puts down to the difficulty in making large amounts of carbon nanotubes and because they oxidise easily at high temperatures. ’It’s a great thing that [the researchers] have shown this and attracted the attention of the community,’ he adds.

Xu and his colleagues are now trying to find industrial applications for their discovery, before trying to improve their material for those applications. ’We believe the operational temperature of our material can be extended to even lower temperature and temperatures as high as carbon nanotubes are stable (up to 2000?C to 3000?C).’