Nanowires go round the bend

UK chemists have bent an apparently linear molecular wire into a closed circle, creating a conducting ring just 3 nanometres across. The feat is particularly impressive because such organic molecule wires are generally regarded as rod-like and rigid, due to the double and triple carbon bonds that allow electrons to travel through them.
Harry Anderson’s group at the University of Oxford envisioned a molecular ring made of eight porphyrin units (the cyclic compound that hosts the metal atoms in haemoglobin and chlorophyll), strung together with hydrocarbon linkers containing two carbon-carbon triple bonds (butadiyne). As this closed loop should be fully conjugated, with its electrons smearing freely along its length, it might have unusual electronic properties. But turning this hypothetical ring into a reality required the chemists to bend the open-chain rigid wire precursor.
The researchers enlisted the help of metal coordination chemistry. Anderson designed a molecular hub with eight spokes. Each spoke ended with a pyridine group, whose nitrogen atom could form a non-covalent bond with the zinc ion at the centre of each porphyrin unit of the linear wire. The idea was that the wire could then be wrapped around the spoke template, forming something like a bicycle wheel. Computer calculations predicted that the fit between the spokes and the rim would be very nearly perfect. 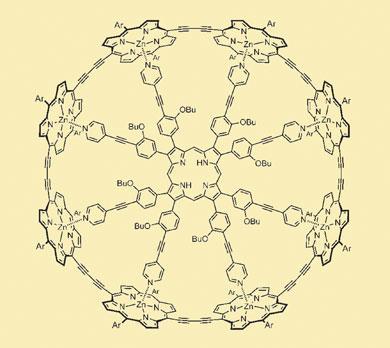 The nanoring: a molecular wire wrapped around chemical spokes

After synthesising the actual molecules, the researchers found that the open-chain version of the eight-membered rim wrapped itself around the spokes construct all by itself. The affinity between the two molecules was too strong to be measured directly. Then, as Anderson explains, ’the ends of the wire were welded together using palladium-catalysed coupling’. Finally, the researchers were able to displace the hub and spokes by bribing the zinc ions with a vast excess of free pyridine molecules. Using NMR and other spectroscopic and chromatographic methods, they showed that the porphyrin construct had indeed formed a cylindrical ring, with an eight-fold symmetry and a diameter of 3 nm.

The researchers are now exploring the electronic properties of the nanoscopic wire loop by removing or adding single electrons, and thus converting the molecule into a radical. ’Physicists have long been fascinated by the persistent ring-currents and quantized magnetisation observed in small loops of wire,’ Anderson told Chemistry World. ’It will be interesting to discover whether similar effects can be observed in molecular nanorings.’ Jeremy Sanders, a professor of chemistry at Cambridge University, welcomed the results enthusiastically. ’This is a synthetic tour de force, producing a molecule of great aesthetic attraction, but which may also have fascinating properties: it would be fun to observe light or electrons travelling around the ring from one porphyrin ring to the next,’ he told Chemistry World.