The claim comes in response to preliminary spectroscopic data showing the characteristic absorption and emission lines of water molecules and hydroxyl - the break-up product of water made from one hydrogen and one oxygen atom - in the Cabeus lunar crater. 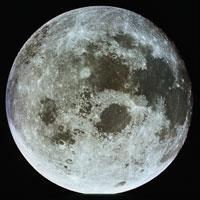 Water has been found in a moon crater

’We are ecstatic,’ said LCROSS project scientist Anthony Colaprete. ’Multiple lines of evidence show water was present in both the high-angle vapour plume and the ejecta curtain created by the LCROSS impact. The concentration and distribution of water and other substances requires further analysis, but it is safe to say Cabeus holds water.’

In October, LCROSS’s ’shepherding’ spacecraft and a companion rocket of some two tonnes impacted the moon’s southern crater Cabeus, launching a plume of material into the sunlight and an additional curtain of debris sideways.

After the impacts, the LCROSS mission team compared known infrared spectral signatures of water with data obtained from the satellite’s infrared spectrometer, and found a close match. They then examined the ultraviolet emission spectra of material that had been exposed to sunlight. In this they found evidence for hydroxyl, which would have been produced when the light split the water molecules into lone oxygen-hydrogen bonds.

For decades scientists have debated whether the moon contains water. Any water that is present is likely to be billions of years old and so could reveal secrets of the early solar system. Moreover, future astronauts might be able to tap into the supply as a resource.

Past samples from impact craters on the moon revealed possible traces of water, while results from Nasa’s Lunar Prospector and Clementine missions also hinted at water ice in dark impact craters. In September the M3 spectrometer onboard India’s Chandrayaan-1 probe detected very small amounts of water on the lunar surface. NASA intended LCROSS to put an end to doubts over the crater ice.

’On the face of it these multiple spectral evidences for water in the Cabeus crater are very exciting,’ said Ian Crawford, a planetary scientist at Birkbeck College, University of London, who works on the Chandrayaan-1 project. ’Clearly more analysis is required, but if confirmed they indicate that theoretical models, and earlier circumstantial evidence, for water ice in permanently shadowed polar regions are correct.’

Planetary scientist Paul Lucey of the University of Hawaii also gives praise. ’The LCROSS findings confirm what has long been suspected, that permanently shadowed craters near the lunar poles contain volatile materials trapped by the low temperatures of the shaded surfaces,’ he said.