Nature captured in a test-tube 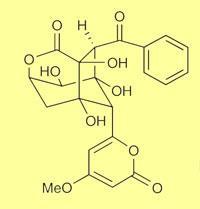 Two groups of researchers in the US have demonstrated how a complex chain of reactions catalysed by multiple enzymes can be reconstructed in the test tube to synthesise naturally occurring products that have potential therapeutic properties.

Many natural products have potential use as drugs, but their chemistry is complicated, often involving large numbers of chiral centres and complicated arrangements of bonds and functional groups. This makes their construction outside the living cell one of the trickier challenges in synthetic chemistry.

One approach to the problem is to mimic nature in the test tube. The concept is simple but the execution highly complicated. The idea is to characterise the biosynthetic pathway in the organism, then apply genetic engineering to manufacture the appropriate enzymes in useable quantities. The enzymes can then be reconstituted into a production line in a single reaction vessel. But identifying the enzymes, producing them outside the natural host and then successfully ensuring that each enzyme operates efficiently, and at its appropriate point in the pathway, is extremely difficult. 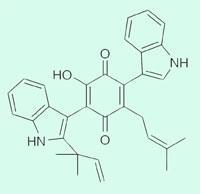 However, the two US groups have now done just this. Bradley Moore of the University of California at San Diego and colleagues1 showed how the naturally occurring bacterial polyketides enterocin and wailupemycin, which can stop bacteria from growing, can be synthesised from the simple precursors malonate and benzoate in a single reactor containing the necessary production line of enzymes. Enterocin production from benzoic acid   required 12 enzymes, resulting in the formation of ten C-C bonds, five C-O bonds and seven chiral centres. ’To our knowledge our results represent the first in vitro assembly of a complete type II polyketide synthase enzymatic pathway to natural products,’ the researchers reported.

Meanwhile at Harvard Medical School, Massachusetts, Christopher Walsh’s team has synthesised the fungal metabolite terraquinone A, which has antitumour activity, by identifying the biosynthetic pathway in a fungus and then reconstituting the natural five-enzyme pathway in a reactor. ’This study constituted the first identification of a biosynthetic pathway for this class of fungal toxins,’ the team reported.

Rebecca Goss of the University of East Anglia, UK described the research as ’an exciting step forward in scientists’ ability to understand and manipulate natural product biosynthesis.’

’Moore’s expression and purification of the full suite of active holoenzymes using a variety of expression hosts is no mean feat,’ she told Chemistry World.