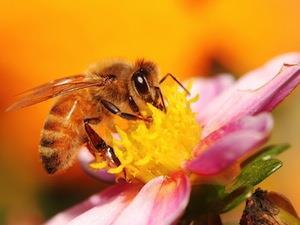 Scientists in Italy believe they have found a molecular trigger by which neonicotinoid pesticides may harm colonies of honeybees. The team’s experiments suggest that exposure to neonicotinoids results in increased levels of a particular protein in bees that inhibits a key molecule involved in the immune response, making the insects more susceptible to attack by harmful viruses.

Francesco Pennacchio, of the University of Naples Federico II, and colleagues identified a gene in insects that codes for a protein family similar to that found in other animals that is known to regulate the immune response. This leucine-rich repeat protein family, or LRR, has been shown to suppress the activity of a key protein involved in immune signalling, called NF-?B. When the researchers exposed bees to sub-lethal doses of the neonicotinoid clothianidin they saw a significant increase in the expression of the gene encoding the LRR protein, and a concomitant suppression of the NF-?B signalling pathway. These effects were not seen when bees were exposed to the organophosphate insecticide chlorpyriphos.

When the team infected bees with a common pathogen – deformed wing virus – and exposed them to clothianidin and another neonicotinoid, imidacloprid, at concentrations similar to those that would be found in the field, there was significantly increased replication of the virus, which was not seen either in untreated bees, or those exposed to chlorpyriphos. The virus is common in bees and usually remains inactive – kept in check by the bees’ immune system. The results suggest that insecticide-induced suppression of bees’ immune systems lets the virus replicate unchecked.

‘The reported effect on immunity exerted by neonicotinoids will allow additional toxicological tests to be defined to assess if chronic exposure of bees to sub-lethal doses of agrochemicals can adversely affect their immune system and health conditions,’ says team member Francesco Nazzi of the University of Udine. ‘Moreover, our data indicate the possible occurrence in insects, as in vertebrates, of a neural modulation of the immune response. This sets the stage for future studies in this research area, and poses the question on how neurotoxic substances may affect the immune response.’

Susan Kegley runs the Pesticide Research Institute, an independent consultancy in the US. She tells Chemistry World: ‘The EU has already implemented a minimum two-year suspension of the use of the most toxic neonicotinoid insecticides – clothianidin, imidacloprid and thiamethoxam – on bee-attractive crops, to take effect December 1, 2013. The US EPA [Environmental Protection Agency] remains unconvinced that neonicotinoids could be a primary factor in recent pollinator population declines. This new study, in conjunction with other observational studies showing enhanced susceptibility to pathogens caused by exposure to neonicotinoids, should prompt US EPA to re-evaluate the science.’