A new class of antimalarial drugs that is effective across various stages of the malaria parasite’s lifecycle has been developed by an international research team. Early indications also show that it may take longer for the parasite to develop resistance to the new molecules than it has for existing drugs targeting the same pathway.

Malaria is a devastating disease worldwide, and the ability of the Plasmodium family of parasites that cause the disease to develop resistance to drugs leads to a constant arms race for new medicines.

Michael Riscoe’s group at the Oregon Health and Science University, US, is part of a large international collaboration pulled together by the Medicines for Malaria Venture. The group has developed a new antimalarial compound that can kill the malaria parasite at several different stages of its lifecycle.

‘When an infected mosquito bites a human, she will inject maybe a dozen sporozoites into the bloodstream,’ Riscoe says. These immature versions of the parasite go to the liver, where they replicate and develop before being released into the blood. The parasites then reproduce both by division and by producing the sexual forms, or gametocytes. The gametocytes are the only form of the parasite that can survive in the gut of a mosquito that bites an infected person, and go on to transmit infection to a new host. ‘The parasite is reproducing at every stage in the infection process, so ELQ-300 can target all of these stages,’ Riscoe adds.

Blast from the past 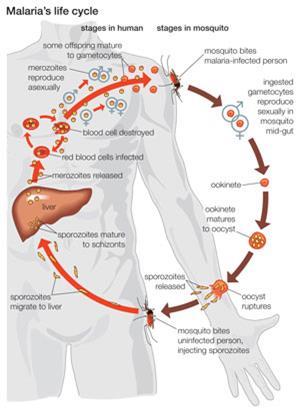 According to Kelly Chibale, director of the drug discovery and development centre at the University of Cape Town, South Africa, this is what really sets this molecule apart. ‘It is affecting the forms of the parasite that most drugs on the market do not affect,’ he says. ‘There is only one drug, primaquine, that works on the liver stage and it’s horrible. It’s a 14 day treatment, lots of people cannot tolerate it, and it isn’t really effective in other stages of the disease. The other class that comes quite close is the artemisinins, which affect the blood stage as well as the gametocyte stage, but they are broken down very rapidly in the body.’

ELQ-300 contains a quinolone ring system and a diaryl ether side chain. Riscoe explains that a quinolone called endochin was first identified as an antimalarial in the 1940s. It could both treat and prevent malaria in birds, but failed in humans because it was metabolised very quickly. To get around this, Riscoe’s team took a cue from a class of pyridone-based drugs with a similar mode of action that pharma company GlaxoSmithKline (GSK) was investigating. These included diaryl ether groups, which the team found greatly improved the metabolic stability of their compounds.

Riscoe points out that, unfortunately, GSK’s pyridone drugs failed in clinical trials as they were toxic. Using a quinolone, which has an extra benzene ring tacked on the side, seems to get around that problem. ‘Selectivity for the parasite mitochondrion over the human version is primarily dictated by substitutions on the benzenoid ring of the quinolone,’ he says.

There is already a drug on the market, atovaquone, which targets the same mitochondrial pathway, says Riscoe. However, resistance to atovaquone develops very rapidly when it is used on its own. The team therefore tried to examine in the lab how quickly resistance might develop to their compound.

‘We think that ELQ-300 binds at a different site to atovaquone on the target enzyme,’ Riscoe says. The molecule was still active against strains of the parasite that were resistant to atovaquone, and experiments designed to try and select for mutations that might cause resistance to ELQ-300 have so far failed. That indicates that it is harder for a single mutation to cause resistance to the molecule, as is the case with atovaquone.

‘Ultimately, in the field, it is hard to predict how fast resistance will develop,’ says Chibale. But the fact that these molecules are active against atovaquone-resistant strains is a strong argument in their favour, he adds.